The Bold And The Beautiful (B&B) scoop for Friday, August 19 reveals Deacon Sharpe (Sean Kanan) will be horrified when he realizes he slept with Sheila Carter (Kimberlin Brown).

B&B spoilers tease Steffy won’t be able to keep her hands off her husband. He’s been miraculously returned to her and she still can’t quite believe it. She’ll tell Finn her love for him has deepened even further.

Sinn fans can look forward to B&B hottest couple steaming up their screens again. They’ll discuss their affection for each other and then they’ll move their conversation into the bedroom. And Sinn will make love. 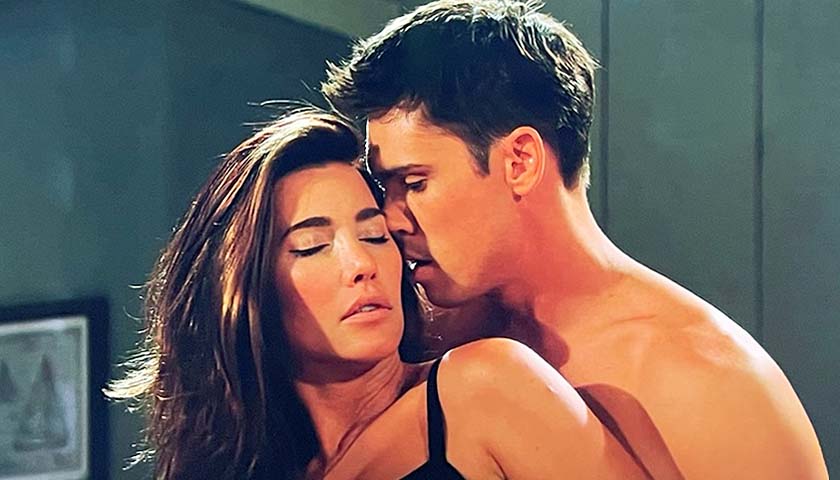 Meanwhile, it looks like Carter’s going to have some explaining to do, when Paris walks into the Forrester CEO office at an inopportune moment. She’ll catch Quinn and Carter kissing and it’ll be an embarrassing moment for all concerned.

After all, the last time Carter was with Paris, he dumped her at the altar for Quinn. Of course, Carter felt bad about it, but he was also overjoyed to reunite with Quinn. So, when Caris finally see each other again, will Paris put him on blast?

Bold And The Beautiful Scoop – Will Deacon’s Parole Officer Arrive?

Finally, Deacon was in denial at first when he saw that the woman he slept with was missing a toe. Then he remembered Brooke Forrester (Katherine Kelly Lang) talking about how Sheila’s toe was found at the scene of her death.

But when Sheila whipped off the mask and wig on Thursday’s B&B and revealed herself, he was in shock. “Mama’s back!” Sheila said, laughing triumphantly. But will Deacon’s parole officer happen to show up before he has a chance to process what just happened?