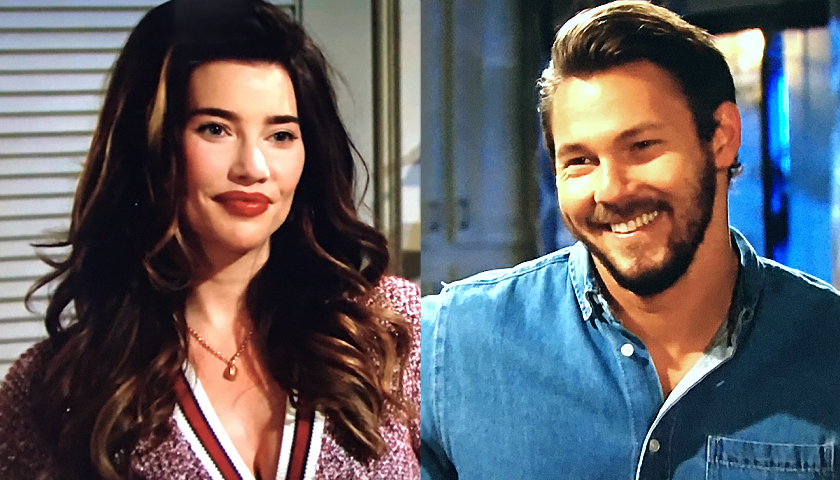 The Bold And The Beautiful (B&B) scoop suggests Liam Spencer (Scott Clifton) and Steffy Forrester (Jacqueline MacInnes Wood) may end up back in each other’s arms again.

Spoilers tease Liam will be distraught when he thinks he witnesses Hope Spencer (Annika Noelle) making out with Thomas Forrester (Matthew Atkinson). But will his eyes be deceiving him?

It’s highly unlikely Hope would cheat on Liam with Thomas. A spoiler photo shows a shirtless Thomas with the doll in a low lit room. So, let’s just assume Liam will walk in on Thomas with the mannequin, not Hope.

Bold And The Beautiful Poll – Thomas Forrester Had A Warning For Dr. Finnegan

However, as per his usual modus operandi, instead of confronting them, Liam will rush over to the cliff house. Once he’s there, he’ll burden Steffy with what he thinks he saw – a shirtless Thomas embracing Hope. Undoubtedly, she’ll comfort him, but will it lead to more?

Viewers are aware that Steffy is currently in a relationship with Dr. John Finnegan (Tanner Novlan) and they have declared their love for each other. But that doesn’t mean she’s gotten over Liam. Why else is the huge Steam mural still hanging on her living room wall?

Plus, as Thomas always likes to point out, Liam perpetually has a change of heart when it comes to Steffy and Hope. When he’s with one of them he inevitably circles back to the other. Thomas did warn Finn it would only be a matter of time before Liam came sniffing around Steffy again.

Bold And The Beautiful Poll – Is A Who’s The Daddy Storyline Coming Up?

If Steffy and Liam were to sleep together, but keep it a secret from Hope and Finn, it could open a whole new can of worms. Realizing it was a mistake, Steffy would continue in her relationship with Finn and they’ll take their relationship to the next level. The whole scenario could play perfectly into Wood’s real life pregnancy and set up a “who’s the daddy?” storyline.

Spoilers indicate an unbelievable betrayal will have devastating consequences. Will Liam and Steffy cross a line? Vote in our poll below!