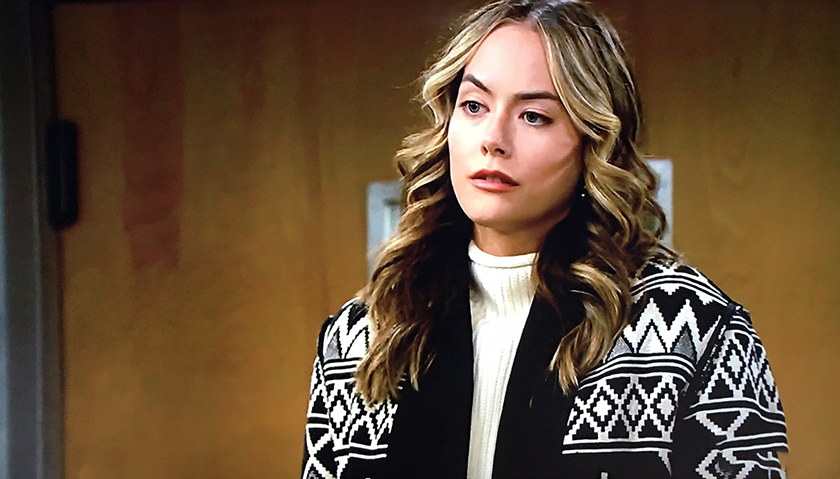 The Bold And The Beautiful (B&B) scoop teases Hope Spencer (Annika Noelle) will eventually find out about Liam Spencer’s (Scott Clifton) infidelity. But what will she do?

Viewers know Liam recently cheated on Hope with Steffy Forrester (Jacqueline MacInnes Wood). He believed his wife had been smooching with Thomas Forrester (Matthew Atkinson). But Hope wasn’t kissing Thomas at all, he was in fact kissing a mannequin that looked like her.

Liam wants to come clean with Hope about sleeping with his ex but Steffy wants to keep it a secret. However, as with all secrets on soap operas, this one will inevitably come to light, probably sooner rather than later.

How is Hope going to react when she hears about Liam’s unfaithfulness? It won’t be the first time he’s broken her heart with Steffy. In 2011, she had to watch him marry her nemesis on a hilltop in Aspen while she was locked in a gondola!

In 2013, Hope’s mother Brooke Forrester (Katherine Kelly Lang) arranged for Hope and Liam to marry at her home. As they were about to say their I Do’s, Steffy burst in to tell Liam she was pregnant with his child.

In just the past year alone, he betrayed Hope by kissing Steffy the day after he proposed to her. And now there’s his latest deceptive move. Steffy believes that fessing up to their tryst would blow their world’s apart and she’s probably right.

It’ll be devastating enough for Hope to learn her husband cheated on her yet again but when she discovers his disloyalty was with Steffy, it will make things that much worse. However, let’s not forget that Hope has forgiven Liam’s duplicity on multiple occasions.

But will his latest betrayal finally be the last straw for Hope or will she once again forgive her sorry excuse for a husband? Vote in our poll below.

Steffy and Liam fight to each do what they think is right. Watch today's episode of #BoldandBeautiful here: https://t.co/LNHVK41WBD pic.twitter.com/FWSKooZyzs

One Thought to “Bold And The Beautiful Poll: Will Hope Dump Liam When She Finds Out He Cheated?”