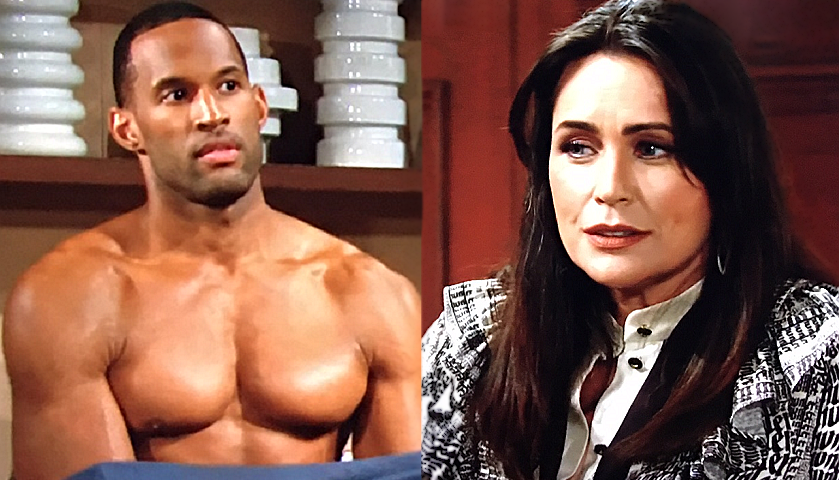 The Bold And The Beautiful (B&B) scoop reveals Quinn Forrester (Rena Sofer) will become closer to Carter Walton (Lawrence Saint Victor) in the coming weeks. But will the two of them become an item?

According to the B&B spring spoilers, Quinn will have a new man in the coming weeks. Many fans had speculated he would be Dr. Finnegan (Tanner Novlan), but it would turn out he’s her long-lost son. However, what if all that speculation was way off the mark?

Viewers know Quinn has befriended Zoe Buckingham (Kiara Barnes) in the last few weeks. First, she helped her pull off a prank on her sister and then she offered to go to bat for her with Carter.

Quinn tried to convince Carter to give Zoe another chance, but didn’t get a chance to finish her pitch. She and Carter were interrupted by Eric Forrester (John McCook) at Forrester Creations. So, Quinn took it upon herself to finish their conversation at his loft.

First, they discussed his relationship with Zoe. Carter told her he really did love his former fiancé but didn’t think he could live the rest of his life wondering “if she’s going to be honest with me.” Quinn told him she could relate to Zoe, who had made ill advised decisions and hurt the man that she loves.

Then she opened up to him about the state of her marriage. “It’s wonderful to have a satisfying sexual relationship,” she said. “But it leaves an incredible void when that connection is lost.” Then she admitted that aspect of her marriage isn’t as fulfilling as it used to be.

Bold And The Beautiful Poll – Will Quinn Forrester Fall For Carter Walton?

In the coming week, Quinn will try to put the spark back into her relationship with Eric. But it’s going to fall flat and they may become more distant than ever. So, it seems as though both Quinn and Carter will be nursing broken hearts. And what better medicine is there for heartbreak than a hot new romance?

So, what do you think? In Quinn’s newfound quest to help Zoe reunite with Carter, will she end up falling for him herself? Vote in our poll below!

Will Carter Be The New Man In Quinn’s Life?

One Thought to “Bold And The Beautiful Poll: Will Carter Be The New Man In Quinn’s Life?”