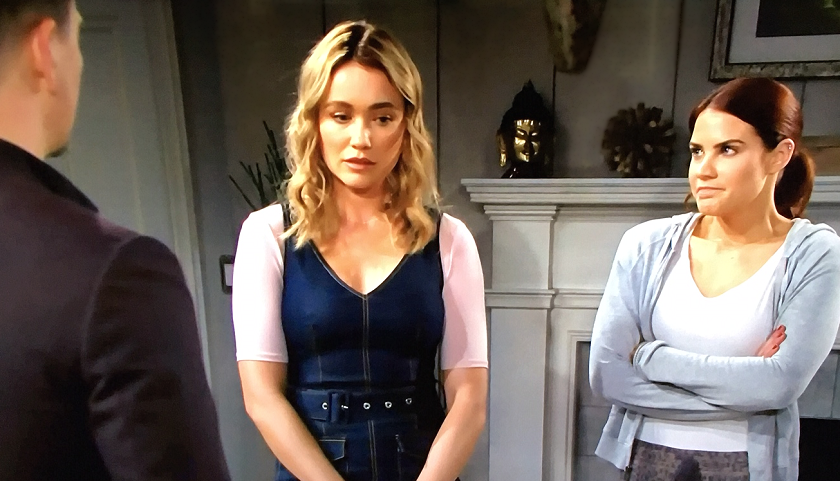 Bold And The Beautiful (B&B) spoilers suggest Wyatt Spencer (Darin Brooks) will soon need to make a decision about his love life.

He believes he’s in love with Flo Fulton (Katrina Bowden). She was his high school sweetheart and he reconnected with her in early 2019. At the time though, he thought he was in love with Sally Spectra (Courtney Hope).

Wyatt ended up dumping Sally for Flo soon after she appeared on the scene. But what he didn’t know at the time was that she was heavily involved in Dr. Reese Buckingham’s (Wayne Brady) baby switch scheme. Flo pretended to be baby Beth’s birth mother, which caused unbelievable heartache for Wyatt’s brother Liam Spencer (Scott Clifton) and his wife Hope Spencer (Annika Noelle).

Once Wyatt found out, he dumped Flo and proposed to Sally, who said yes and took him back. But after Flo donated her kidney to Katie Logan (Heather Tom), Wyatt forgave her and broke off his engagement to Sally.

Then again, Sally Spectra (Courtney Hope) is no saint either. She’s trying to win Wyatt back from Flo, by pretending to be dying. She told Dr. Penny Escobar (Monica Ruiz) all about it on Thursday.

“It was sheer, dumb luck that Katie showed up at my first doctor’s appointment,” Sally said. “Katie was so concerned about me dying alone, that I knew she was going to tell Wyatt.”

Sally also believes that Wyatt never stopped loving her and Flo just got in the way. “Do you want to see the man that I love end up with that manipulative baby thief?” Sally asked Penny. “Deep down, I know that Wyatt still loves me and we would be married right now if it wasn’t for Flo.”

Other spoilers tease that in the coming weeks, Flo will ask him to move Sally out of his house. And how long can Sally continue to pull the wool over Wyatt’s eyes? By the time he finds out she was faking her illness, will he have fallen in love with her all over again, just as Sally has planned? Or will he stick with Flo?

What do you think? Who should Wyatt be with – Sally or Flo? Vote in our poll now!