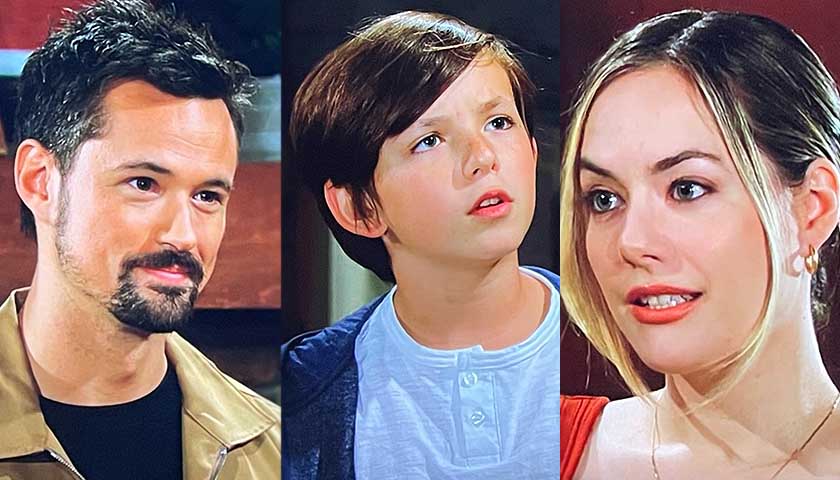 The Bold And The Beautiful (B&B) scoop reveals the battle for Douglas Forrester (Django Ferri) will continue. But who should he live with – Thomas Forrester (Matthew Atkinson) or Hope Spencer (Annika Noelle)?

Rumor has it, Hope won’t believe him and she’ll head over to Eric’s herself. She’ll call Thomas out for lying and accuse him of being selfish by putting his own needs above his son’s. But is she right?

B&B Poll – Thomas Pressured His Son To Keep A Secret

Viewers will recall that in the not so distant past, Thomas pressured Douglas to keep the secret that baby Phoebe was really baby Beth. And during that dark time, he was even downright abusive to his son. Then he put Douglas through his insincere marriage proposal and called off wedding to Zoe Buckingham (Kiara Barnes). Of course, it was all just Thomas’ ploy to try to win Hope’s affections.

However, it was later discovered that Thomas was suffering from a brain tumor. And since he had the tumor removed, he seems to have put his life back together, with one small blip. Thomas kept Sheila Carter’s (Kimberlin Brown) secret about pushing Brooke Forrester (Katherine Kelly Lang) off the wagon. But, to his credit, Douglas was not involved.

Hope hasn’t always been a saint either, when it comes to the child. She manipulated Thomas into giving her custody. Plus, both she and Liam Spencer (Scott Clifton) went along with her mother’s campaign to convince Douglas not to say anything about Grandma Brooke kissing Santa Claus on New Year’s Eve. Which was pretty shady, to say the least.

Bold And The Beautiful Scoop – Douglas Misses His Father A Lot

Perhaps when it comes right down to it, Douglas should be the one to decide where he’s going to live. But would he choose Thomas? “I miss you a lot. I wish we could be together more,” Douglas recently told his father. “Do you miss me when we’re not together?”

So, what do you think? Should Hope continue to raise Douglas with Liam, or should he move into Eric’s place with Thomas? Vote in our poll below!

Should Douglas Live With Thomas Or Hope?

Keep reading The Soap Scoop, your source for the latest soap opera spoilers and B&B spoilers and news. And make sure you join our free Facebook Group. But if you miss an episode, don’t fret. You can watch The Bold And The Beautiful online at CBS.com.