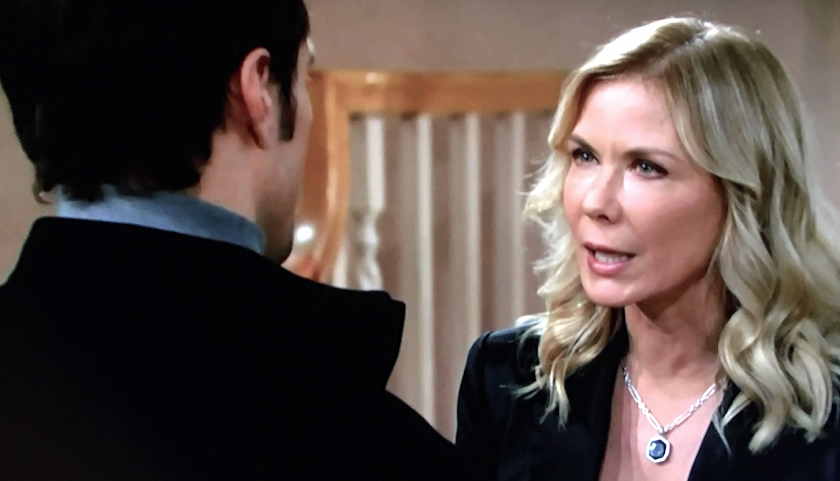 Bold And The Beautiful (B&B) spoilers for next week indicate Brooke Forrester (Katherine Kelly Lang) is going to make a deal with Ridge Forrester (Thornsten Kaye) to save their marriage. Will she agree to forgive Thomas Forrester (Matthew Atkinson)?

Thomas has been on Brooke’s radar since he returned to Los Angeles with his young son Douglas Forrester (Henry Joseph Samiri) about a year ago. Douglas’ mom Caroline Spencer (Linsey Godfrey) had just passed away and both were in mourning.

But Thomas quickly set his sights on Hope Logan (Annika Noelle). He decided she would be the perfect mother for his son, and the perfect life partner for him. Since then, he has pulled every trick in the book to win Hope over, and Brooke sees right through him. This has caused a rift in her marriage to Ridge, as she stubbornly refuses to forgive Thomas for his past sins.

Maybe Brooke should reconsider her position though, because she is no saint herself. Back in the 1990s, Brooke was obsessed with Ridge when he was married to Taylor Hayes (Hunter Tylo) and she tried everything she could think of win Ridge over.

She faked a pregnancy and lied to Ridge about Thomas’ paternity. And much like Thomas convinced Steffy Forrester (Jacqueline MacInnes Wood) to kiss Liam Spencer (Scott Clifton), Brooke convinced Thorne Forrester (Winsor Harmon) to make a play for Taylor.

Thomas recently proposed marriage to Zoe Buckingham (Kiara Barnes). But shortly before the proposal, at a dinner he had arranged, Brooke had harsh words for her stepson.

“You know exactly what you’re doing, you’re trying to exploit Hope and Douglas’ feelings,” she told Thomas. But Thomas just rolled his eyes. “I thought you wanted me to move on and find an extraordinary woman to fall in love with,” he countered. Then Brooke told him she wasn’t buying the pack of lies he was selling.

Now that Thomas is engaged to Zoe, Brooke still believes he is a danger to Hope. But maybe she should take a long, hard look at herself and realize that Thomas is playing the exact same game she did 30 years ago. And if she forgives Thomas, she can still salvage her marriage to his father.

So, what do you think? Should Brooke forgive Thomas? Vote in our poll below.

One Thought to “Bold And The Beautiful Poll: Should Brooke Forgive Thomas?”