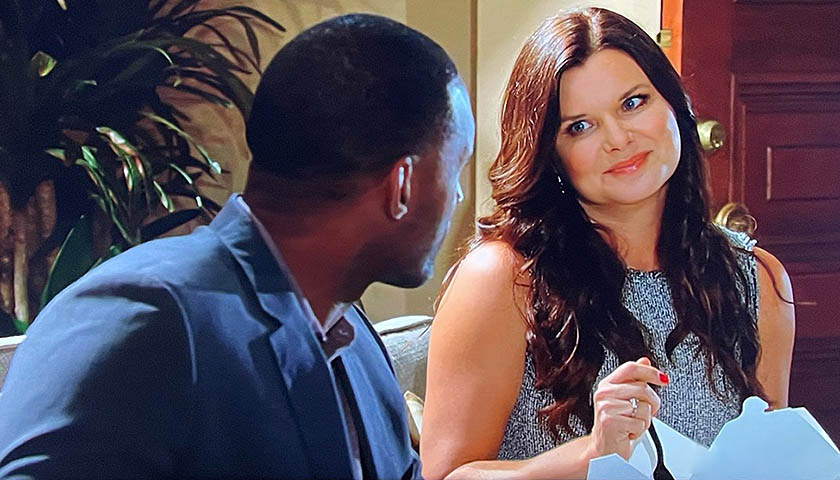 The Bold And The Beautiful (B&B) scoop reveals Katie Logan (Heather Tom) and Carter Walton’s (Lawrence Saint Victor) friendship will thrive in the coming weeks. But will it turn into romance?

B&B spoilers tease that this week, Katie will start to depend on Carter as a sounding board. Ever since she stormed over to his loft and shouted at him for betraying Eric Forrester (John McCook), they seemed to have formed an unexpected alliance.

This prospective coupling has also surprised viewers. But it has lots of potential. Quinn Forrester (Rena Sofer) would go mad with jealousy if she found out Carter has already moved on. We also know Bill Spencer (Don Diamont) would hit the roof if the Forrester COO hooked up with “His Katie.” Quinn and Bill might even team up to break them up!

B&B Poll – Bill Spencer Desperate To Reunite With His Ex

As fans have seen, Bill is desperate to reunite with his ex. But she confided in Carter recently that she wasn’t going to take him back. She believes she deserves a man who will put her first and remain loyal to her. Could that man be Carter?

Viewers have already started to sound off on social media and some really like the idea of Carter and Katie as a couple. “I think it would be refreshing seeing a new couple on B&B. Bill needs to know that Katie is not his puppet that he can snap his fingers and she will come back to him,” one fan said. “I LOVE THEM TOGETHER!!! Good job bold,” another chimed in.

Other fans, however, don’t like the thought of Carter and Katie together at all. “This is the most contrived and forced romance plot ever seen and it portrays Carter as a desperate simp,” one viewer commented. “5 minutes ago Carter was madly in love with Quinn, now you’re making googly eyes at Katie…make it make sense!” another said.

Bold And The Beautiful Poll – Producers Setting Up a New Couple?

It looks as though producers may be setting up a brand new couple, which could create angst for a lot of other characters. So, what do you think? Carter and Katie seem to have a sweet chemistry when they’re together, but could they create the same kind of steam that Quarter did? Vote in our poll below!

Do You Want Katie And Carter To Fall In Love?

Keep reading The Soap Scoop, your source for the latest soap opera spoilers and B&B spoilers and news. And make sure you also join our free Facebook Group. Plus, if you miss an episode, don’t fret. You can watch The Bold And The Beautiful online at CBS.com.