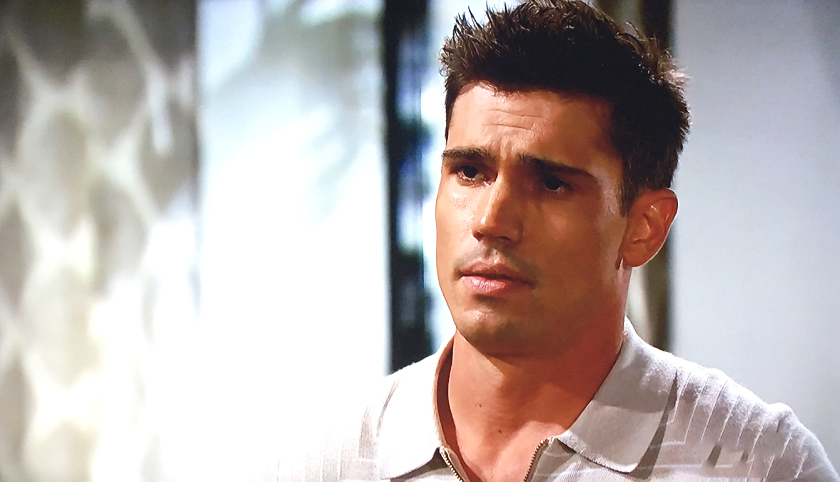 The Bold And The Beautiful (B&B) scoop for Wednesday, November 25 reveals Dr. Finnegan (Tanner Novlan) will show up out of the blue at Thomas Forrester’s (Matthew Atkinson) apartment.

Please note, the B&B will be preempted on Thursday, as CBS will air a Thanksgiving day parade. Friday’s show will be a Thanksgiving episode that originally aired on November 21, 2018. New episodes will be back on Monday.

Spoilers tease Liam will rush to the cliff house after witnessing Thomas with his hands all over a more-than-willing Hope Spencer (Annika Noelle). Of course, viewers know Hope and Douglas Forrester (Henry Joseph Samiri) had left Thomas’ apartment. What Liam saw was Thomas with the Hope mannequin.

It’s not like Liam doesn’t know the mannequin exists. He made a huge fuss over it when he initially discovered it. Liam took off over to Forrester Creations to snitch on Thomas immediately, but was disappointed by the reactions he received. Both Hope and Steffy said there had to be a reason Thomas had the dummy in his living room.

Steffy will try her best to be sympathetic, but she’ll also tell him he must be mistaken. She’ll give her brother the benefit of the doubt and she’ll also be doubtful Hope would cheat on him with Thomas. However, Liam will believe everything he feared would happen has happened and he will be devastated.

Bold And The Beautiful Scoop – Will Finn Think Thomas Forrester Has An Issue?

Meanwhile, Finn’s arrival will bring a perplexed Thomas back to reality. And unlike Liam, he’ll actually knock on Thomas’ door. He thought he was kissing Hope, but Thomas will suddenly realize it was the mannequin. The designer will give his head a shake and scramble to clear his mind.

When Thomas opens the door, Finn will find a disheveled Thomas standing there. He won’t initially know what’s wrong with Steffy’s brother. But as Thomas touches the side of his head, will the doctor start to think he has a medical issue?