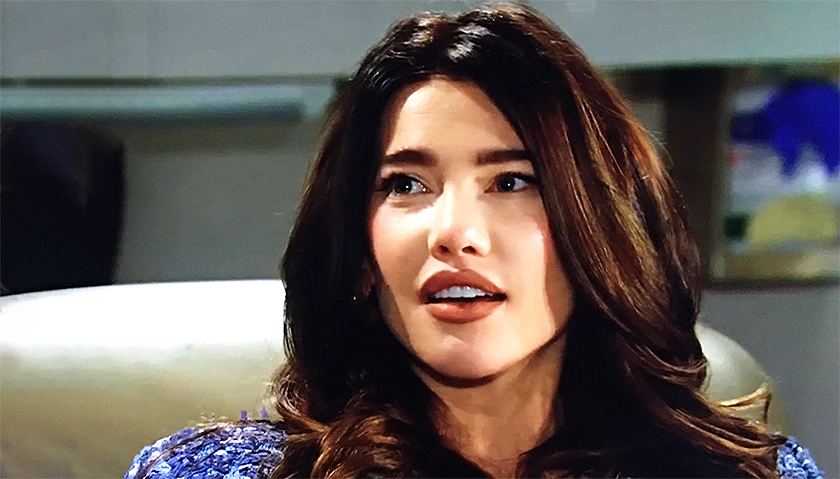 The Bold And The Beautiful (B&B) scoop for Wednesday, July 2 reveals Steffy Forrester (Jacqueline MacInnes Wood) will prepare for the arrival of her baby boy.

In addition, when Liam Spencer (Scott Clifton) is taken away in handcuffs, an emotional Hope Spencer (Annika Noelle) will tell her husband she forgives him.

Spoilers tease Steffy and Dr. Finnegen (Tanner Novlan) are thrilled they’re expecting a healthy baby boy. Steffy even confided to Finn it was what she was hoping for. And she shared her good news with everyone at Forrester on Tuesday.

Bold And The Beautiful Scoop – Will Viewers See A Finn Wedding Sometime Soon?

Ridge Forrester (Thorsten Kaye) was excited about having another grandson and congratulated her and Finn. As did Thomas Forrester (Matthew Atkinson). Of course, Steffy and Finn are also engaged, so will viewers get to see a Sinn wedding in the near future?

Meanwhile, Hope is praying for the best. Liam admitted to Deputy Chief Baker (Dan Martin) that he caused Vinny Walker’s (Joe LoCicero) death. But she’ll be hoping against hope that Baker will believe it was an accident.

Although Baker may be a hot dog eating goof ball at times, he’s no fool. As he listens to Liam tell his story, he won’t have much sympathy for him. Liam told him it was unintentional and after Baker gets a few more details, he’ll arrest him.

Many viewers are wondering why on earth Liam didn’t call a lawyer to go in with him. But that’s neither here nor there and what’s done is done. However, as distraught as he’ll be when they cart him off to a prison cell, he’ll get some empathy from his wife.

Hope will tell him she forgives him for everything. It’ll be a small piece of solace for Liam as the walls close in on him. He will be charged with Vinny’s murder and then thrown behind bars. But at some point, will Liam regret his decision to come clean?