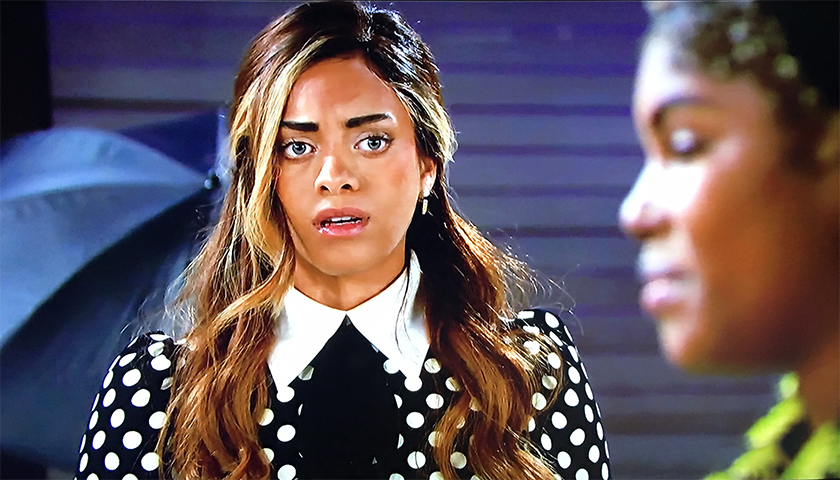 The Bold And The Beautiful (B&B) scoop for Wednesday, January 13 reveals Paris Buckingham (Diamond White) and Zoe Buckingham (Kiara Barnes) will face off.

In addition, Dr. Finnegan (Tanner Novlan) will be in utter shock when his cheating girlfriend informs him that she’s pregnant. At the cabin, Hope Spencer (Annika Noelle) will also learn Steffy Forrester (Jacqueline MacInnes Wood) is with child.

Spoilers tease not only will Finn be reeling from Steffy’s confession that she slept with Liam Spencer (Scott Clifton), he’ll be hit with a double whammy. Steffy will then admit the only reason she told him about her betrayal with Liam is because she’s knocked up.

Meanwhile, after receiving Hope’s forgiveness, Liam will need to tell her the other big news. “I also wish that I could put that night behind us and never think about it again,” he said to his wife on Tuesday. “But that may not be possible.” Then Hope will lose it when he tells her Steffy’s expecting.

Plus, rumor has it the situation at the cliff house will become even more intense when Liam shows up. He’ll be there to cry on Steffy’s shoulder again, after confessing his infidelity to Hope. Liam won’t expect to see Finn and he’ll be in for an unpleasant surprise when he’s confronted by the doctor.

Meanwhile, Zoe was livid when Paris told her she was accepting the job at Forrester Creations. And it got worse when she mentioned she and Zende Forrester (Delon de Metz) shared a smooch.

“He came in rushing after me, telling me not to go,” Paris confided to Zoe. “I want this chance, Zoe, and I want a chance with Zende too.” Then she admitted she kissed him but the best part was “he kissed me back.”

On Wednesday, the two siblings will really go at it. Zoe will once again demand that Paris leave town. She’ll also accuse her sister of encroaching on her territory and Paris will accuse Zoe of being jealous of her. Will these siblings ever be able to find common ground?

The big secret is about to be revealed. Tune in to #BoldandBeautiful tomorrow to see what happens next! pic.twitter.com/S3ZgIkrobV