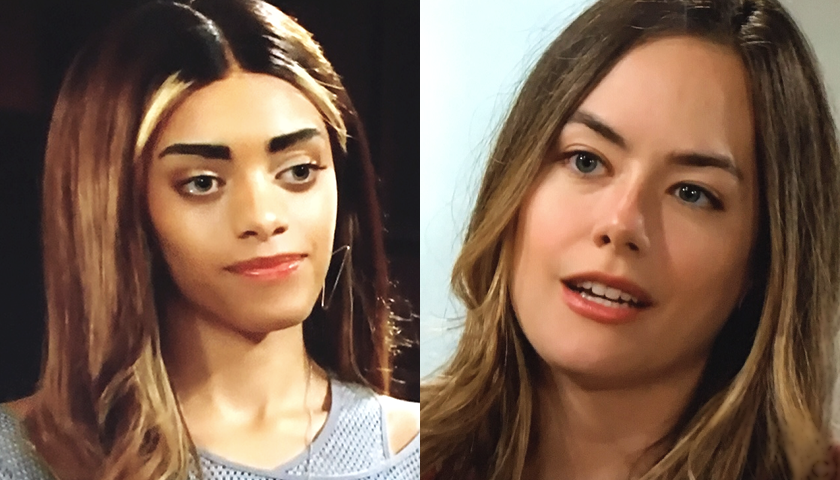 The Bold And The Beautiful (B&B) scoop for Wednesday, August 12 reveals Hope Spencer (Annika Noelle) and Zoe Buckingham (Kiara Barnes) will team up.

On Monday, Brooke’s daughter Bridget Forrester (Ashley Jones) called her to cancel Brooke’s trip to New York. And as much as Brooke was disappointed she couldn’t visit her daughter and grandson Logan, she also saw the upside.

She and Ridge just reunited and she’s planning a romantic evening for the two of them. “Ridge is going to be moving back into my place today,” Brooke told her sister Donna Logan (Jennifer Gareis). “I’m going to give him a surprise – one he’ll never forget.”

Or so she thinks. Instead, Ridge will surprise her, with news about he and Shauna that will knock her off her feet. Brooke will at first believe that he slept with the former Vegas chorus girl. But her head will be practically spinning off its axis when he tells Brooke that he and Shauna tied the knot.

Meanwhile, Hope and Zoe have never been friends. But it looks like on Wednesday, they’re going to put the past aside and become allies. Viewers know Zoe was a big part of keeping the baby Beth secret from Hope.

Her father Reese Buckingham (Wayne Brady) told Hope and Liam Spencer (Scott Clifton) their baby had been stillborn. But it was all a lie so he could steal the child and sell it to pay off his gambling debts and protect his daughter. Zoe found out and, in turn, kept the secret to protect her father from going to jail.

Hope had been angry with Zoe for some time. But the two women will make peace and decide to work together for the success of the Hope For The Future line. They’ll hope to put the past behind them. But can they do it and how long will their alliance last?

One Thought to “Bold And The Beautiful Daily Scoop Wednesday, August 12: Zoe And Hope Put The Past Behind Them – Ridge Has Bad News For Brooke”