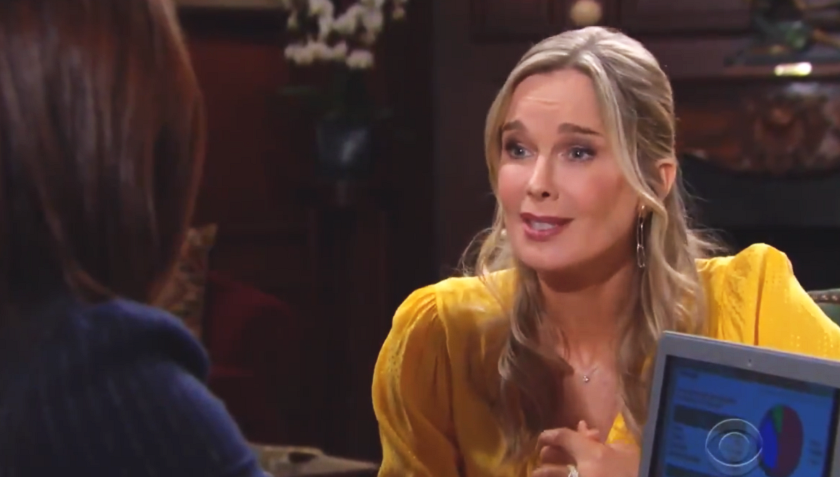 The Bold And The Beautiful Daily Scoop for Wednesday, April 22 reveals Donna Logan (Jennifer Gareis) will have a heart to heart conversation with Katie Logan (Heather Tom).

Also coming up on Wednesday, the argument between Flo Fulton (Katrina Bowden) and Sally Spectra (Courtney Hope) will escalate when Dr. Penny Escobar (Monica Ruiz) arrives. And Wyatt will discuss his feelings for Sally and Flo with his father.

Spoilers tease Donna will ask Katie if she’s going to give Bill Spencer (Don Diamont) another chance. Katie still loves Bill but she knows he will always be tempted by her sister. “They’re incapable of keeping their hands off of each other,” Katie says to Donna in the B&B weekly preview.

Donna will tell her sister she sincerely believes that Bill is sorry for kissing Brooke Forrester (Katherine Kelly Lang). But Katie is not so sure. “I just don’t know if I can ever trust him again,” she will reply.

Later, Wyatt will ask Bill’s opinion on what he should do. He’s in a real pickle, as Flo wants Sally out of his house. She thinks his ex would be better off living in a hospice. But Wyatt thinks Sally is dying and wants to be there for her.

Bill and Wyatt will discuss his being torn between the two women. Will Bill advise him to let Sally stay, or will he agree with Flo that Sally would be better off being at a medical facility?

Meanwhile, Wyatt has no idea that while he’s asking his dear old dad for advice, Flo and Sally will be at each other’s throats. Flo knows Sally’s been faking her illness and on Tuesday, Sally confessed to doing so. But that doesn’t mean she’s going to give up her ultimate goal of winning over Wyatt.

Flo is angry that she and Wyatt put their lives on hold for Sally, for no reason. “It’s all just a giant, disgusting lie,” Flo said to Sally. But Sally didn’t seem to care and remained defiant in the face of Flo’s accusations. Their fierce argument will continue on Wednesday and spoilers tease Penny will arrive in the middle of it. And she’s going to make a game-changing decision that will change everything.