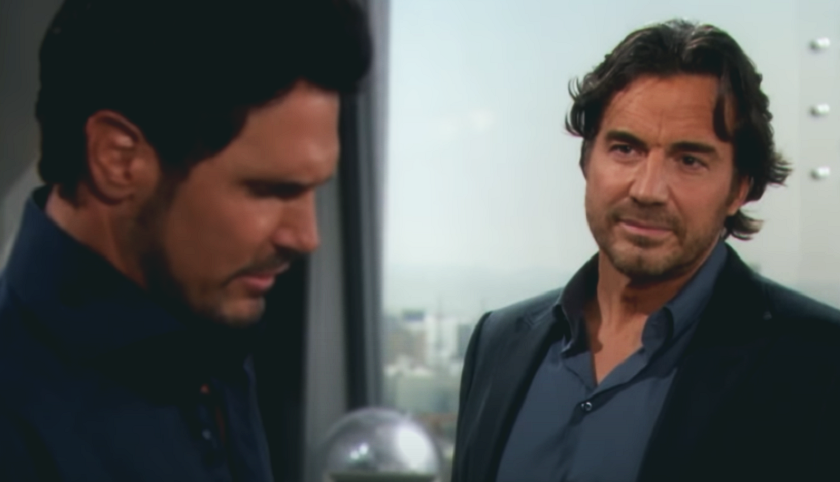 The Bold And The Beautiful (B&B) scoop for Tuesday, September 8 reveals Ridge Forrester (Thorsten Kaye) will face off with Bill Spencer (Don Diamont).

Also coming up, Steffy Forrester (Jacqueline MacInnes Wood) will open up about her vulnerabilities to Dr. Finnegan (Tanner Novlan), hoping to get what she wants.

Spoilers tease Steffy will lower her guard with Finn. She will tell him about her situation with Liam Spencer (Scott Clifton) and Hope Spencer (Annika Noelle). She may also disclose that she had a miscarriage in a motorcycle accident years ago.

Bold And The Beautiful Scoop – Will Steffy Forrester’s Ploy Work On Dr. Finnegan?

Steffy could even get into what happened to her daughter Phoebe. When everyone found out she was really baby Beth, the child she had fallen in love with and raised for months was unceremoniously ripped from her arms. Will Steffy also mention losing her twin sister Phoebe?

Although she does seem to trust Finn enough to open up to him about her history of loss, she will also be playing on his sympathies. Steffy is hoping he’ll feel enough compassion to change his mind about refilling her medication. Will her ploy work?

Meanwhile, Bill and Ridge will get into it once again. It’s no secret that he loathes Bill with a passion and he’ll take the opportunity to unload on his enemy on Tuesday. In this particular instance, Ridge will criticize Bill for his many offenses against his family.

He is still angry about Bill sleeping with and then chasing after his daughter, not to mention his latest misdeed, hitting Steffy with his car. “You destroy lives – all you think about is yourself,” he has said to Bill in the past. “Is that what you were doing, thinking about yourself, when you ran into my daughter’s bike?”

Ridge is also displeased about Bill once again pursuing Brooke. And he’ll be sure to bring it up when the two men face off. In the past, their arguments have turned physical – will it be the same this time around?