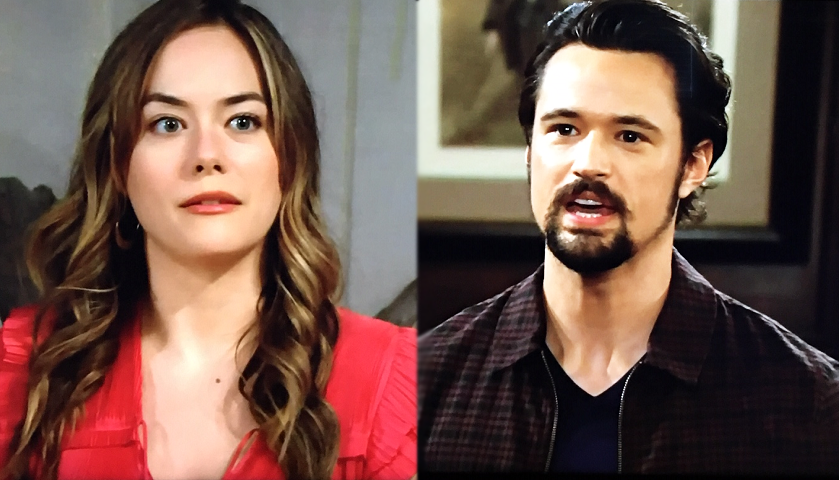 The Bold And The Beautiful (B&B) scoop for Tuesday, September 22 reveals Thomas Forrester’s (Matthew Atkinson)’s opinion on Steam will have an adverse effect on Hope Spencer (Annika Noelle).

Plus, Steffy Forrester (Jacqueline MacInnes Wood) will be infuriated with Liam Spencer (Scott Clifton) when he tries to take Kelly Spencer (Avalon and Collette Gray).

After years of pent-up frustration, Steffy will unleash her full fury on her ex. Steffy feels that she and her daughter have taken a back seat to Hope and she’ll let Liam know, in no uncertain terms, that he will not be leaving her house with Kelly.

Liam will be completely stunned by Steffy’s behavior. Of course, he’ll blame it on the pills. But will he also realize some of what she’s saying has a ring of truth to it? He’s hurt Steffy quite badly in the past and needs to own up to it.

But for the time being, Liam’s focus will be on what’s best for Kelly. “This whole situation is out of control,” Liam tells her in the B&B weekly promo. And according to spoilers, Steffy will accuse Lope of kidnapping her daughter later in the week. So it’s safe to say Liam will take Kelly with him when he leaves the cliff house, despite her mother’s objections.

Finally, on Monday we saw Thomas and Hope discuss his redemption arc. She appreciates that he’s changed his ways and told him the most important thing was that they both put Douglas Forrester (Henry Joseph Samiri) first.

“I’m always going to be grateful that you’re letting me share him with you,” Hope told Thomas. “You’ve been making an effort and Douglas sees that and so do I.”

On Tuesday, Thomas will continue to talk about Steam and Liam’s jealousy issues when it comes to Dr. Finnegan (Tanner Novlan). Hope is already feeling antsy about it. And Thomas may just plant the seed that makes her wonder if Liam is as committed to her as he says he is.