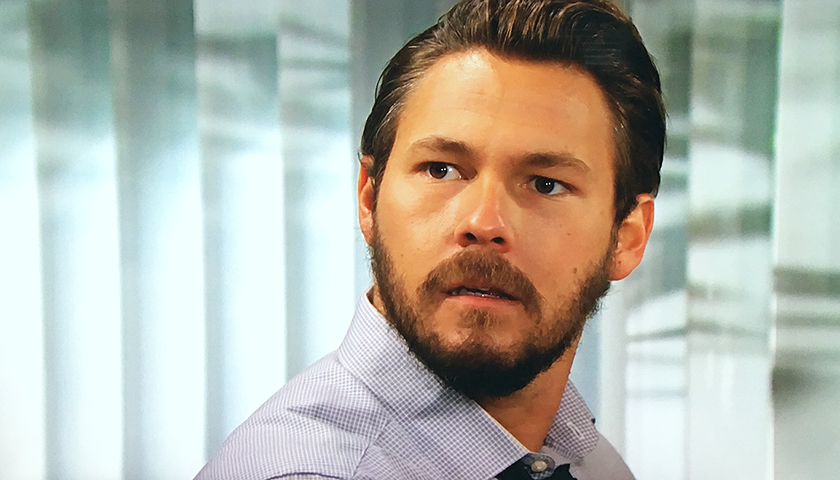 The Bold And The Beautiful (B&B) scoop for Tuesday, November 24 reveals Liam Spencer (Scott Clifton) will witness something shocking.

In addition, Thomas Forrester (Matthew Atkinson) will make a critical mistake, as he teeters between reality and fantasy.

Spoilers tease Thomas will find himself in a quagmire of his own making. As Hope Spencer (Annika Noelle) plays with Douglas Forrester (Henry Joseph Samiri) at his apartment, Thomas will invite her to stay for dinner with them and she’ll accept.

But it’s rumored that the Hope mannequin will come alive for him again, while they’re enjoying their meal. It’ll start talking to him and goading him into making a move on the real Hope.

Thomas will try his best to keep it together while his son and Hope are there. But after his guests depart, all bets are off! The mannequin will try to seduce him and Thomas may find himself hooking up with the dummy.

Meanwhile, Liam will be enjoying his own family dinner, with Steffy Forrester (Jacqueline MacInnes Wood), but he’ll be thinking about Hope. He’ll call his wife several times and when she doesn’t answer, he’ll leave in a huff.

Liam will head to Thomas’ apartment to confront him and what he witnesses there will leave him in a state of disbelief. As he walks into Thomas’ place without knocking, he’ll step into a darkly lit room, only to see a semi-nude Thomas canoodling with Hope. But is that what he really sees, or will he just observe Thomas playing tongue hockey with the mannequin?

In a state of complete shock, Liam blast out of there like a rocket. However, he’ll be so stunned he won’t know what to do next. Then it’ll come to him – why not saddle Steffy with his problems? How will she react when Liam tells her the unbelievable story of what he thinks he saw?

Today on #BoldandBeautiful, the Hope Mannequin comes to life for Thomas during a family dinner with Hope and Douglas. pic.twitter.com/N2RvZIS1aH