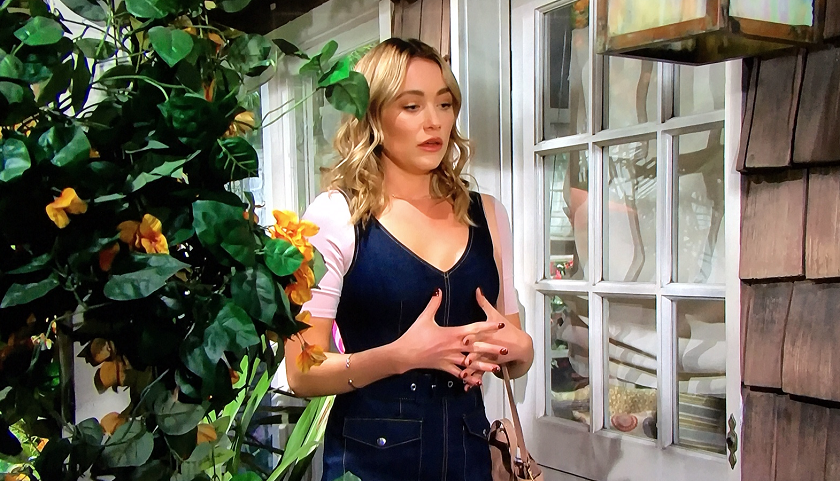 Brooke had gone upstairs to look for the frame’s manual. When she came back downstairs, Donna gave her the third degree. “I know what you did, I saw it with my own eyes,” Donna told her sister. “I saw you kiss Bill.” But Brooke will convince Donna it only happened once and they need to figure out how to delete the video.

Meanwhile, a very naive Flo suggested to Wyatt on Monday that she pay Sally a visit. Wyatt had just finished telling her that Sally knew her secret was out. Flo hopes she can smooth over any differences they’ve had in the past. “It might be kind of cool if I can talk to her and let her know that I really do support you two being together,” she told Wyatt. He agreed. “The more support she has, the better.”

When Flo arrived, she found Sally lying on the floor. She had no idea that Dr. Escobar (Monica Ruiz) had just left, having agreed to keep Sally’s secret for a while longer. At first, she had urged Sally to come clean. “You’re not dying Sally and it’s beyond cruel to make everyone think that you are.” But Sally wasn’t having it. “You want me to tell him I have a long life ahead of me and I’m perfectly fine?” Sally said. “Eventually I’ll be cured, but not today.”

Meanwhile, Flo will begin to notice how oddly Sally is acting toward Wyatt Spencer (Darin Brooks). Now that everything is out in the open, or so Flo thinks, she thought Sally would be acting a lot differently.

Instead, Flo will observe that Sally seems to be nervous and jumpy and she’ll begin to wonder why. And an odd thought will pop into her head – what if Sally is faking the whole thing? Flo will try to put her doubts aside but in the coming days and weeks she’ll start to become even more suspicious of her rival.