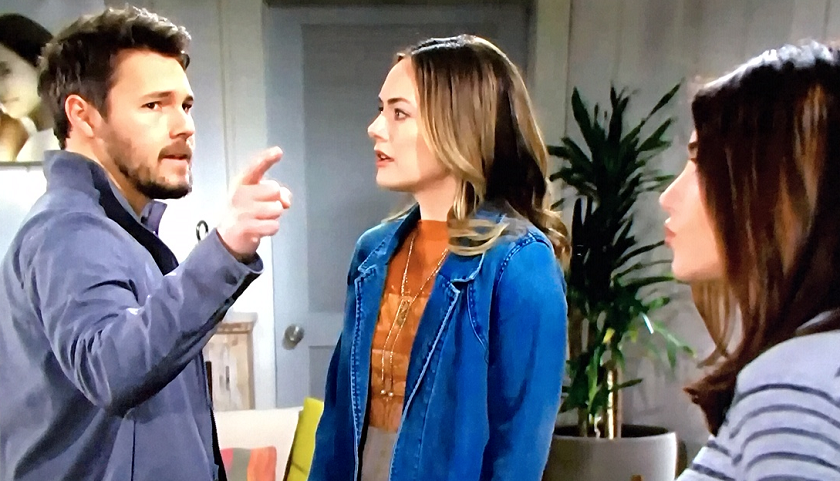 The Bold And The Beautiful (B&B) scoop for Tuesday, March 10 reveals that Liam Spencer (Scott Clifton), Hope Logan (Annika Noelle) and Steffy Forrester (Jacqueline MacInnes Wood) will come up with a plan to take down Thomas Forrester (Matthew Atkinson).

Also coming up, Brooke Forrester (Katherine Kelly Lang) and Bill Spencer (Don Diamont) will reminsce and reflect on their kiss and their relationships.

When Hope found out Thomas was behind Steffy and Liam’s kiss, she was furious. The result of their manipulation caused the shattering of her family and the end of her relationship with Liam. And Steffy offered Hope a sincere apology for her part in the plot.

“Hate me if you want Hope, but I had to come clean,” Steffy told Hope on Monday. “I had to tell you the truth.” And Hope was angry with Steffy, until her rival told her to forgive Liam and put her family back together with him.

Bold And The Beautiful Poll: Will Hope And Liam Get Remarried? Vote now! #boldandbeautiful #boldandthebeautiful #Lopehttps://t.co/J3qPmvIHQI

Liam proposed to Hope again, but this time he told her Douglas Forrester (Henry Joseph Samiri) would be a part of their family. An exited Hope said yes, as Steffy looked on. And on Tuesday, Steffy, Hope and Liam will agree to team up to protect Douglas and take Thomas down a peg or three.

Meanwhile, Brooke and Bill have just shared a passionate and unexpected kiss. They’ll both be shocked by what just happened. Bill had just told her that they’d never been great at being married but he’d always look out for her.

“Just because we’re not together anymore doesn’t mean that I don’t still care about you,” Bill said. “I’ll take care of you until the day I die. If you need me, I’m here for you.

Brill will also reflect on their relationships with Ridge Forrester (Thorsten Kaye) and Katie Logan (Heather Tom). Although she’ll likely feel a little giddy, Brooke will also feel incredibly guilty for betraying both Ridge and her sister. And Bill is now engaged to Katie and was hoping to marry her soon.

They’ll both agree to put the kiss behind them and never speak of it again. But kissing Brooke will remind him of the feelings he had for her and he won’t be able to get her off his mind. Will the kiss end up leading to more between Brill?