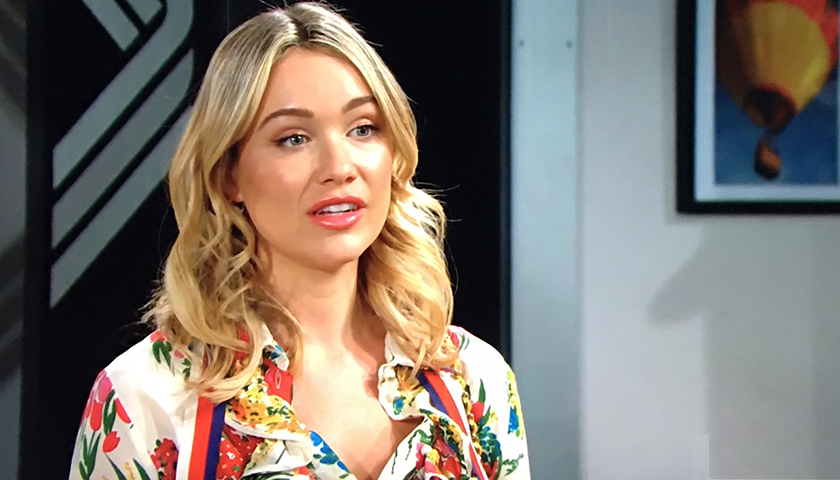 In addition, Flo Fulton (Katrina Bowden) will hint to Summer Newman (Hunter King) that she has the goods on Sally Spectra (Courtney Hope).

Viewers should note, the B&B will be preempted on Wednesday, January 20 for the United States presidential inauguration ceremony. The show will return on Thursday, January 21.

In a crossover with the Young And The Restless (Y&R), Flo overheard JCV head Summer drop Sally’s name to Wyatt Spencer (Darin Brooks). But Wyatt made it clear he was not interested in discussing his ex.

Spoilers tease it will occur to Flo that Summer may be looking for some dirt on the former Forrester designer. And if anyone has the information she’s looking for, it’d be Flo. “Did you know Sally?” Summer asked her on Monday. “Know her? Did I ever!” Flo replied. But will she spill all to Summer?

Finally, viewers will see Liam beg for forgiveness, part deux, on Tuesday. Last week, he got down on his knees asking for absolution, after he confessed his infidelity to his wife. “I’m not trying to justify what I did. I know that’s impossible, I know that,” he told her. “I’m just trying to explain how it happened.”

Hope loves him so much that she did try to grant him some sort of amnesty. He was grateful when she told him maybe they could eventually get past his betrayal. It would take awhile, but she said she would try.

However, her attitude changed quickly when he told her Steffy was pregnant. Hope knows the child could be Liam’s and that is something she may not be willing to forgive. Will Liam’s pleas fall on deaf ears? Could this be the bitter end of Lope?

One Thought to “Bold And The Beautiful Daily Scoop Tuesday, January 19: Flo Tells Summer She’s Got The Goods On Sally – Liam Begs Hope To Forgive Him”