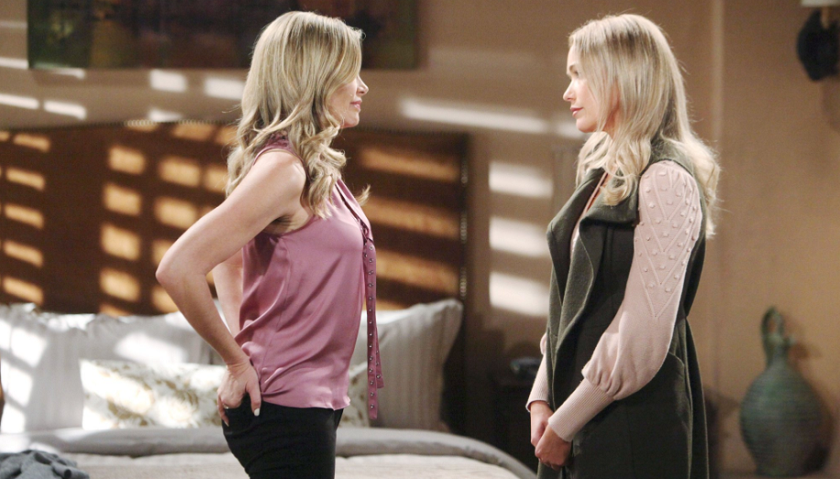 Bold And The Beautiful spoilers for Tuesday, January 14 tease Sally Spectra (Courtney Hope) will fret that she may get fired from Forrester Creations. And Shauna Fulton (Denise Richards) will encourage her daughter to win back the man she loves.

Flo Fulton (Katrina Bowden) returns to the B&B on Tuesday and will have a discussion with her mother about Wyatt Spencer (Darin Brooks). Flo has kept her distance since Wyatt got engaged to Sally. But she still loves him and wants a life with him.

Shauna will tell her daughter she needs to prepare for battle. She will advise her that Wyatt isn’t married to Sally yet and this could be her last chance to reunite with him.

Although he’s currently engaged to Sally, Wyatt still seems to be torn between the two women. He loves Sally, but blurting out his brother Liam Spencer’s (Scott Clifton) name right after she’d kissed Wyatt didn’t help her case any. And he recently spoke to Flo about how much he admired her after she donated one of her kidneys to Katie.

Bold And The Beautiful Poll: Who Should Liam Be With – Hope Or Steffy? Vote in our poll! #BoldandtheBeautiful #BoldandBeautiful #Lope #Steamhttps://t.co/pqCiy989xk

Spoilers tease that later in the week, Flo will take her mother’s advice to heart and pull out all the stops to win Wyatt back. But how will he react?

Meanwhile, Steffy Forrester (Jacqueline MacInnes Wood) will be concerned when she sees Sally’s latest designs for the Forrester fashion showdown. As far as Steffy’s concerned, the designs are not up to snuff and she’ll begin to believe that she and Sally could lose.

Steffy knows her brother Thomas Forrester (Matthew Atkinson) is a talented designer and will be tough to beat. Up until now, Sally’s designs have been great – so why the sudden turnaround in quality?

Rumor has it, Steffy will show the sketches to her father and co-CEO Ridge Forrester (Thorsten Kaye). He will confront Sally on Tuesday’s episode about her poor quality work. Sally has a lot on her mind these days and this will be the last thing she needs. She will begin to wonder if she’s going to be fired from Forrester Creations.

It looks like a great episode is coming up. Keep reading The Soap Scoop for more Bold And The Beautiful spoilers and news. And make sure you click here to join our free Facebook Group.