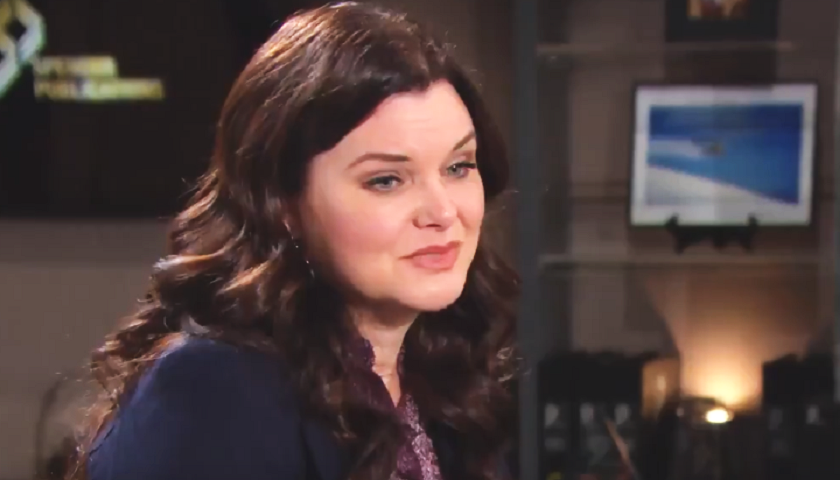 Katie was with Sally at the doctor’s office when she received her shocking diagnosis. She did her best to support the Forrester designer but Katie herself is also dumbfounded by the horrible news.

On Tuesday, she’ll turn to her husband Bill. He knows she’s been keeping something from him but wasn’t sure what it was. Bill too will be completely stunned when he hears that Sally only has weeks left to live. It wasn’t so long ago that Katie herself had a life-threatening health crisis.

“She’s always ready for a fight,” Katie tells Bill in the B&B weekly promo. “So how terrifying must it be facing one her doctor’s say she can’t win?” Rumor has it, Katie will also struggle on whether to tell Wyatt Spencer (Darin Brooks), as Sally had specifically asked her not to tell him the terrible truth.

Bill also recently told his son Sally would get through their breakup. Wyatt had paid a visit to his father and said he could tell something was wrong and that he felt like his former fiance was keeping something from him.

But Bill assured him that Sally would be okay. “You just broke off the engagement, what do you want her to do, throw herself a party?” Bill had exclaimed. “She’s heartbroken Wyatt – her relationship flat-lined.”

And Sally’s ex Thomas will continue plotting and scheming to win back his current obsession, Hope Logan (Annika Noelle) and he’ll let his buddy Vinny in on his plans. Vinny has not taken a liking to Thomas’ recent schemes and will call him out again, this time for playing with Zoe Buckingham’s (Kiara Barnes) heart.