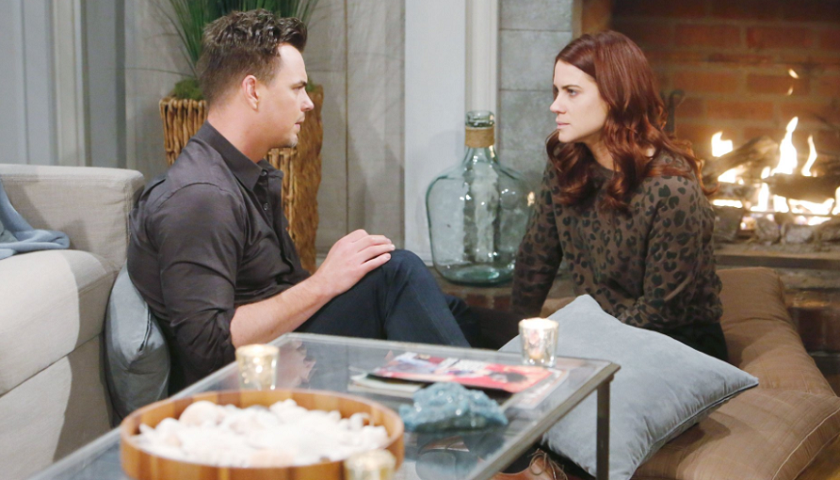 The Bold And The Beautiful (B&B) scoop for Tuesday, April 7 reveals Sally Spectra (Courtney Hope) will agree to get treatment. But there’s a catch.

Spoilers tease Sally will tell Wyatt Spencer (Darin Brooks) she needs him. “I’m all in,” he will reply. But Sally will then engage in a game of quid pro quo with him. He continues to insist to Sally that she should get help for the symptoms she is experiencing.

Wyatt wants Sally to be more comfortable and he also wants her to fight for her life. She will tell him she’ll agree to seek treatment for her “fatal” illness. But only if they reunite for real. Will he agree to the deal?

Bold And The Beautiful Poll: Who Should Wyatt Be With – Sally Or Flo? #BoldandBeautiful #BoldandtheBeautiful #Wally #Flyatthttps://t.co/ryd0eIY0gs

Viewers have known for weeks now that Sally is gas-lighting Wyatt and faking her illness. She’s pretending to be dying so she can win Wyatt back from Flo. “Wyatt never stopped loving me,” she told Penny last week. “Flo just got in the way. We will have the future back that Flo stole from us.”

Meanwhile, Flo will continue her conversation with Dr. Escobar on Tuesday. She doesn’t want Sally to suffer and is hoping the doctor can provide some advice in order to help Sally get through the next few weeks.

“I’m a friend of one of your patients. She’s in very grave condition and I’m worried about her,” Flo told Dr. Escobar on Monday. “There must be something that you can do.” Penny tried to look sympathetic, even though she’s in on Sally’s scam.

But then on Tuesday, something will happen that will set off alarm bells in Flo’s head. She’ll find the doctor’s sketch pad, filled with designs, on Penny’s desk. What is a doctor doing drawing pictures of designer clothing? Flo’s suspicions will be raised and she will wonder if there is more to all of this than meets the eye.