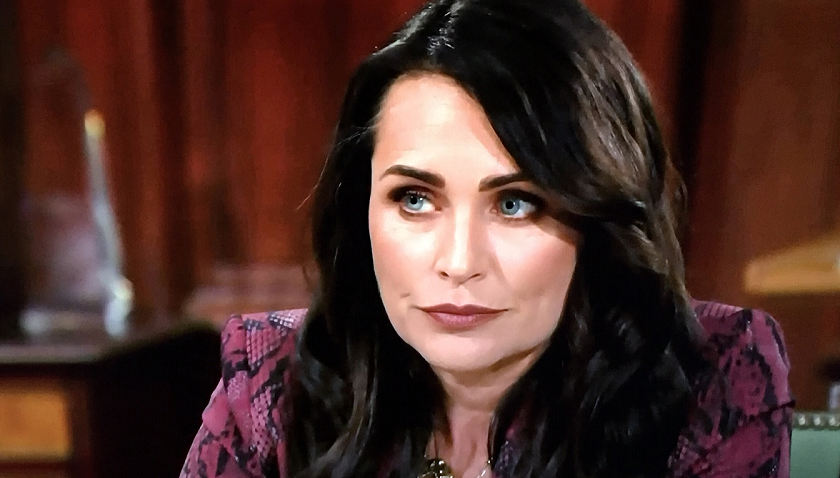 Also coming up on Tuesday, Flo Fulton (Katrina Bowden) will get the upper hand in her fierce confrontation with Sally Spectra (Courtney Hope).

Spoilers tease Wyatt will be surprised on Tuesday, when his mother agrees with Katie Logan (Heather Tom). He’ll be engaged in a conversation with the two women about asking Sally to move out of his house.

Flo had requested he kick out his ex-fiance and although he was reluctant, he went ahead with it anyway. She had pointed out to him that Sally’s condition would probably begin deteriorating and he wasn’t exactly equipped to deal with it. She suggested Sally be moved to a hospice.

Katie loves her niece, but believes that Sally needs his support more. And Quinn will say that allowing Sally to stay is definitely the right thing to do. Quinn has never been a fan of Sally’s and in fact, she’s always favored Flo. After all, Flo is her bestie Shauna Fulton’s (Denise Richards) daughter.

So, his mother’s opinion is sure to stun Wyatt. But an unintended consequence will be that he’ll feel even worse about asking Sally to move out. Rumor has it, the next person he will confide in, later in the week, is his father, Bill Spencer (Don Diamont).

Meanwhile, after playing a game of cat and mouse with Sally on Monday, the advantage will be Flo’s. Spoilers tease she’s going to call out Sally on playing she and Wyatt for fools when the truth is, she’s not really sick.

Sally will be shocked when Flo tells her she saw her medical file and knows she’s been faking her fatal illness. Then she’ll call her a fraud. And when Dr. Penny Escobar (Monica Ruiz) arrives on Wednesday, the situation will escalate to a whole other level.