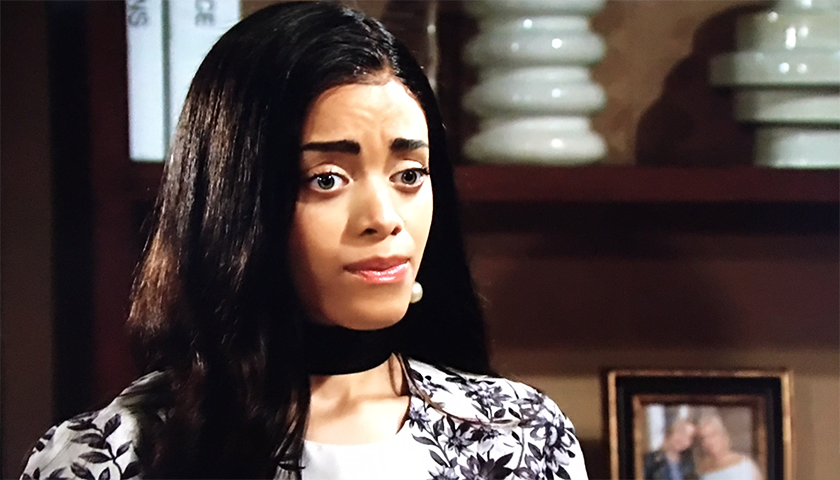 The Bold And The Beautiful (B&B) scoop for Tuesday, April 13 reveals Zoe Buckingham (Kiara Barnes) will come up with a plan.

Spoilers tease Liam will continue to be submerged in the quagmire his father created. And he’ll become more paranoid and guilt-ridden as he wrestles with the deadly secret he’s been forced to keep.

Bill Spencer (Don Diamont) will worry about his son’s mental state. On Monday, he told Liam to “let it go,” but he’s clearly struggling. However, Bill will once again make it clear that they’ve made their bed and have to lie in it now. Bill knows there’s no going back and he’ll continue to convince Liam of that unfortunate fact.

Meanwhile, Zende will run into Carter at Forrester Creations and it’ll be awkward, to say the least. The two men have barely spoken a word to each other since Carter found out about the text Zende sent Zoe, which directly led to Zoe’s betrayal.

The Forrester designer will try to reconcile his differences with his former friend. At the same time, he’ll advise Carter to forgive Zoe. But will Zende have any luck convincing Carter to quash his feelings of resentment?

Speaking of Zoe, the model will come up with what she considers an ingenious plan to reunite with the man she professes to love. She’s been trying to figure out a way to win Carter back since he dumped her a few weeks ago.

Zoe may even decide to draft Quinn Forrester (Rena Sofer) to help her. But will her scheme involve something romantic or will Zoe have a more devious plan in mind?

Today on #BoldandBeautiful, an emotional and positive identification is made on the recently deceased. pic.twitter.com/YoB45EwvGK