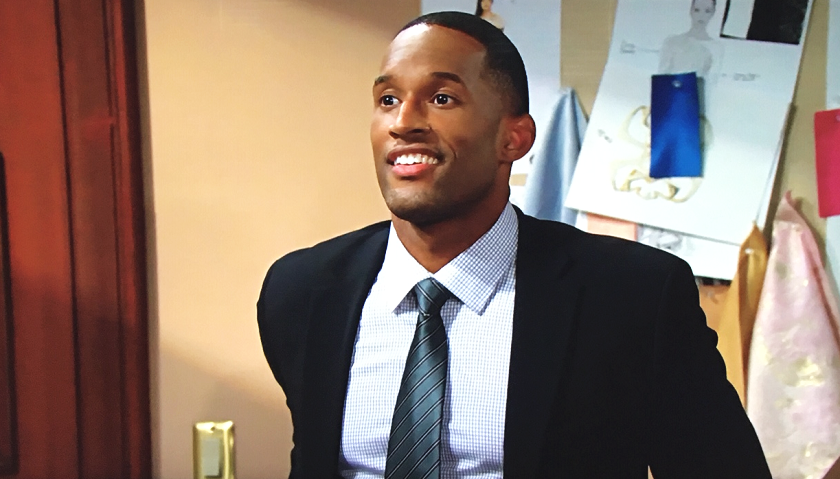 The Bold And The Beautiful (B&B) scoop for Thursday, October 22 reveals Carter Walton (Lawrence Saint James) will attempt to take his relationship with Zoe Buckingham (Kiara Barnes) to the next level.

In addition, Liam Spencer (Scott Clifton) will make a confession about Thomas Forrester (Matthew Atkinson), as he and Hope Spencer (Annika Noelle) have another frank discussion.

Liam and Hope have been hashing out their differences of opinion about his ex’s budding new relationship for days now. Hope thinks Dr. Finnegan (Tanner Novlan) is good for Steffy Forrester (Jacqueline MacInnes Wood) but Liam has disagreed.

However, Hope did get Liam to admit one of his issues with Finn was jealousy. He finally acknowledged to his wife that he was envious of the doctor. But just because he owned up to that fact doesn’t mean he won’t be keeping a watchful eye on the relationship as it develops.

Bold And The Beautiful Poll: Is Finn A Good Guy Or A Villain In Disguise? #BoldandBeautiful #BoldandtheBeautiful #Sinn #Steam https://t.co/XqtLkqQJ1y

In their discussion on Thursday, Hope will mention Thomas. And it’s rumored Liam will make an admission about his former rival. Will he say he was jealous of all the affection Thomas showered on her when he and Hope were together for a short time? Does he think Thomas is over his obsession with her? Unfortunately, it doesn’t seem like Thomas’ obsession is going to end any time soon, considering he took a life-like mannequin of Hope home with him!

Meanwhile, poor Carter has no idea his girlfriend has been flirting up a storm with Zende Forrester (Delon De Metz). Forrester’s new COO has been completely wrapped up in his work. Plus, he seems so enamored with the model that he can’t see past his affection for her.

Bold And The Beautiful Scoop – Has Carter Walton Noticed Or Just Turned A Blind Eye?

Zoe and Zende have been getting closer since he arrived from Paris a few weeks ago. Carter either hasn’t noticed, or has turned a blind eye to it. He even asked Zoe to move in with him recently but she respectfully declined.

On Thursday, Carter will step up his game and treat her to a romantic evening at his loft. Zoe will be impressed and flattered, but will it have any effect on her growing feelings for Zende?

Zoe opens up to Zende about Carter before serenading him with a song. Watch today's all-new episode of #BoldandBeautiful here: https://t.co/D90Y4nPyu2 pic.twitter.com/EStyQrjjbf