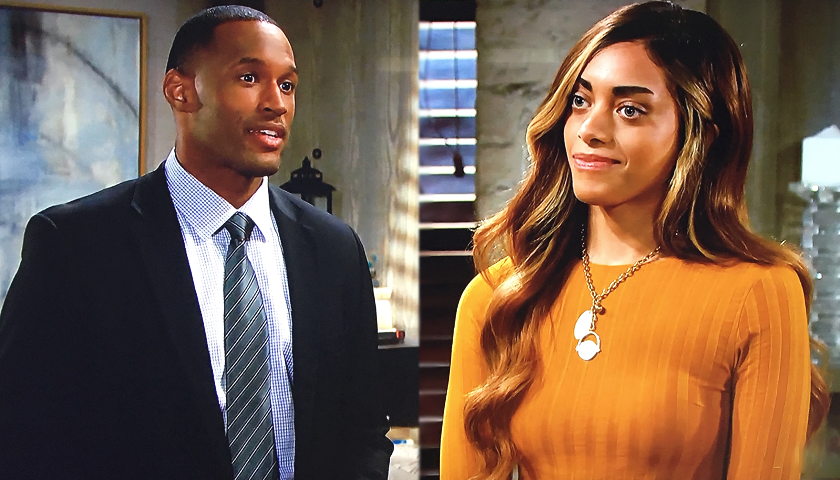 The Bold And The Beautiful (B&B) scoop for Thursday, October 15 reveals Zoe Buckingham (Kiara Barnes) and Carter Walton (Lawrence Saint Victor) will have a chat about their romantic future.

Also, Dr. Finnegan (Tanner Novlan) will take control of a situation. And it will mark the start of an epic rivalry with Liam Spencer (Scott Clifton).

Spoilers tease after Liam’s meltdown over Finn arranging a reunion for Steffy Forrester (Jacqueline MacInnes Wood) and her daughter, the doctor will put his foot down. He’s already aware of Liam’s controlling ways and he doesn’t like it.

For Liam’s part however, he’s mentioned to Bill Spencer (Don Diamont) that he blames Finn for Steffy’s addiction. He ranted and raved to his father about the doctor being distracted by his feelings for his ex.

“If he’d just kept it professional when it mattered, he would have seen the signs of addiction sooner,” Liam told Bill. “In fact, it is his lack of objectivity that helped Steffy get addicted to the pain meds in the first place.”

When he arrived at Steffy’s and she left the room to check on their daughter, he told Finn to “find another patient to date.” On Thursday, Finn will tell Liam he should mind his own business. He will point out Steffy has her own life to live. Finn will say that Liam doesn’t need to worry about her, he will take good care of her.

Meanwhile, Zoe will still be stunned by Carter’s proposal. On Wednesday, he offered the runway model a key to his new loft and asked her to move in with him. When he saw the look on her face, he told her he knows they haven’t been seeing each other very long. But he’s ready to take the next step.

However, Carter doesn’t know Zoe has also become attracted to Zende Forrester (Delon De Metz). But will she admit this, or just tell Carter he’s moving way too fast?