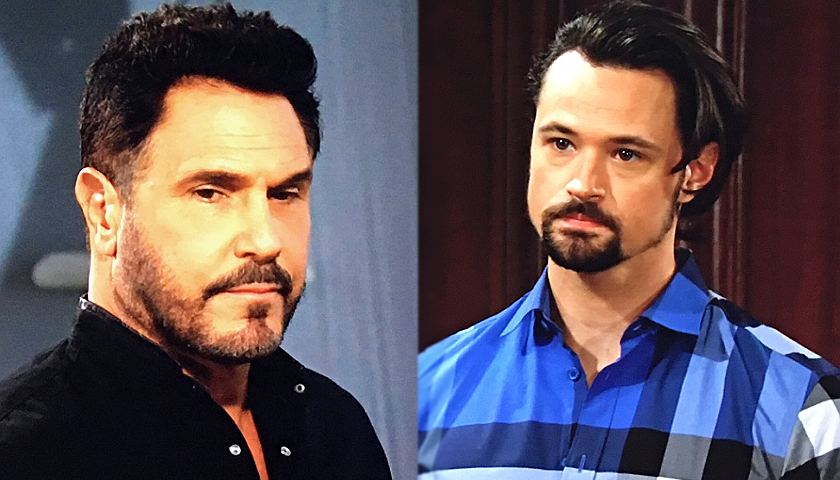 The Bold And The Beautiful (B&B) scoop for Thursday, May 20 reveals Thomas Forrester (Matthew Atkinson) will catch Bill Spencer (Don Diamont) off guard.

In addition, Liam Spencer’s (Scott Clifton) strange behavior will continue, which will alarm his wife.

Spoilers tease Liam will continue to obsess about the night he hit Vinny Walker (Joe LoCicero) with his father’s car. He’s been trying to stop thinking about it. However, try as he might, he just cannot get it out of his mind.

Liam even apologized to Thomas about Vinny on Wednesday. “Hey, I want you to know, I feel really terrible about what happened,” he said. “I’m sorry Thomas. I’m really sorry.”

Hope has asked Liam to open up to her. “What are you keeping from me, we promised no more secrets,” she said to him. However, Liam told her he doesn’t want to involve her in what he did. But will Hope have any better luck getting to the heart of what’s disturbing Liam on Thursday?

Meanwhile, Thomas will head over to Spencer Publications for an interview with Eye On Fashion. He’ll think about his earlier conversation with Liam and decide to pay Bill a surprise visit. This will turn out to be a mistake.

Bill won’t exactly give Thomas a friendly greeting. In fact, he’ll be none too pleased to see the Forrester designer in his office. Viewers know he has no use for Thomas and considers him an enemy. He even recently complained to his sons about Thomas, calling him a “loser” and pointing out all the trouble he’s caused Liam.

Obviously, Thomas’ visit will be not be a pleasant one. B&B spoilers indicate Bill and Thomas’ conversation will be confrontational. However, later in the week, their argument will become so fierce that Wyatt Spencer (Darin Brooks) will have to break it up. But will it get physical?