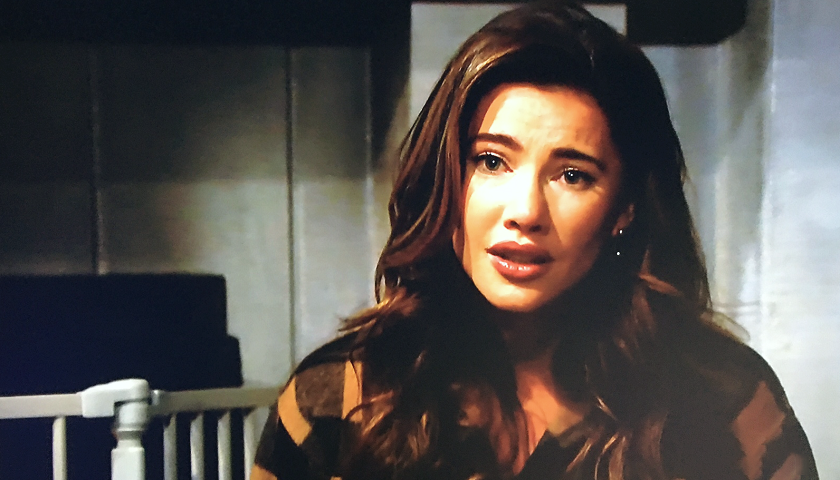 The Bold And The Beautiful (B&B) scoop for Thursday, December 31 reveals Steffy Forrester (Jacqueline MacInnes Wood) will struggle with her guilt.

In addition, a fed up Zoe Buckingham (Kiara Barnes) wants her sister out of Los Angeles as soon as possible. Plus Liam Spencer (Scott Clifton) will back down.

Viewers should note, the B&B will air a repeat episode on Friday, January 1. It will feature Bill Spencer (Don Diamont) and Katie Logan’s (Heather Tom) first wedding from November 13, 2009. New episodes will return on Monday, January 4.

Spoilers tease Zoe will tell Paris Buckingham (Diamond White) she needs to get out of town. She wants her sister to move on and get her own life. Zoe feels as though Paris is clinging to her way too much. Paris will fight back and will tell Zoe she’s an adult and can do whatever she wants. She’s been offered an intriguing job opportunity at Forrester Creations. Who in their right mind would turn that down?

Meanwhile, Liam badly wants to come clean with Hope Spencer (Annika Noelle). But as he looks at Hope’s earnest face, he’ll change his mind. And rather than confess what he’s done, he will continue to delay the inevitable.

Finally, Steffy will spend more time with Dr. Finnegan (Tanner Novlan). As they cuddle up together in her living room, he’ll talk about how perfect it was that they met. And Finn will once again declare his love for her.

Bold And The Beautiful Scoop – Will Steffy Forrester Confess To Dr. Finnegan?

She loves him too, but her guilt will gnaw away at her as she recalls the night she spent with Liam. Every time she looks up at the Steam mural on her living room wall she’s reminded of it.

Worried that Finn will somehow find out the truth, will she confess it before Liam gets the chance to tell Hope? Or will Steffy continue to put it in the back of her mind, while she buries her head in the sand?

The Soap Scoop wishes everyone a very Happy New Year! Keep reading The Soap Scoop for more Bold And The Beautiful spoilers and news. And make sure you join our free Facebook Group.