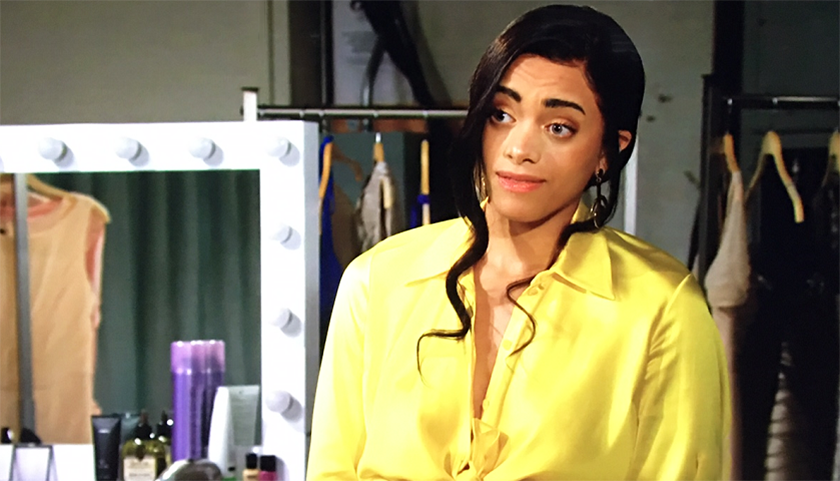 The Bold And The Beautiful (B&B) scoop for Thursday, April 29 reveals Zoe Buckingham (Kiara Barnes) will apologize to her sister.

In addition, Wyatt Spencer (Darin Brooks) will get more than he bargained for when he asks his father a simple question about his favorite sports car. Plus, will Quinn Forrester (Rena Sofer) and Carter Walton (Lawrence Saint Victor) hit the sheets?

Spoilers tease Bill Spencer (Don Diamont) will become highly annoyed when Wyatt foolishly makes an inquiry about his vehicle. He hasn’t seen it in the parking lot at Spencer Publications for days and he’ll wonder where it is.

Bold And The Beautiful Scoop – Will Justin Barber Be There To Lend A Hand?

Of course, Bill will already be aggravated. He just protected Liam Spencer (Scott Clifton) from Deputy Chief Baker’s (Dan Martin) interrogation. So, Wyatt’s harmless question will surely set him off even further.

He’ll try to explain that the value of the car doubled in the last couple of years so he sold it. But Wyatt will find that hard to believe, considering how much his dad loved that car.

Perhaps Justin Barber (Aaron D. Spears) will be there to lend a hand. Viewers know Spears announced last week that he was returning to the B&B. So, will he tell Wyatt to give his father a break and stop asking about his beloved car?

Meanwhile, Zoe’s apology tour will continue on Thursday. She’ll say she’s sorry for not welcoming Paris Buckingham (Diamond White) to Forrester and not being supportive of her new relationship. But will she mention the concoction she put in Paris’ smoothie? Highly unlikely.

Finally, Zoe begged Quinn to once again head to Carter’s loft on her behalf. Quinn is there to try to convince him to take Zoe back. But by the way she was looking at him as he opened the door, shirtless, will she end up jumping into his bed instead?

Hope and Liam make a momentous decision about their relationship. Watch the latest #BoldandBeautiful episodes for free on @CBS or subscribe for more on @paramountplus: https://t.co/hVdPKdZkqX. pic.twitter.com/UrqRxkPkzZ