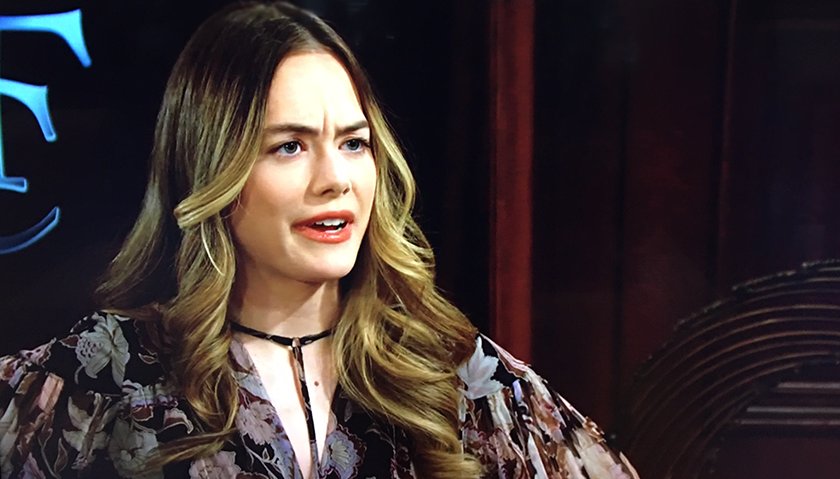 The Bold And The Beautiful (B&B) scoop for Monday, April 19 reveals Hope Spencer (Annika Noelle) will question her husband.

Spoilers tease Quinn will continue to badger Carter about giving Zoe Buckingham (Kiara Barnes) a second chance. He was surprised to see her arrive at his loft on Thursday’s episode.

Carter told her he didn’t realize she was such a staunch supporter of Zoe’s. “I’m a huge supporter of second chances,” she replied. “I relate to Zoe, making ill advised decisions. Hurting the man she loves.”

Carter admitted he still loved Zoe but he just “can’t live the rest of my life wondering if she’s going to be honest with me.” However, she knows he misses his fiancé. So she’ll once again implore Carter to at least consider giving Zoe another chance. But will he be willing to do so?

Meanwhile, Hope is aware there’s something wrong with Liam Spencer. She’s known her husband for more than a decade and the way he’s behaving is off, to say the least. Of course, what she doesn’t know is that just before he walked into the Forrester board room, he thought he was getting busted for killing Vinny Walker (Joe LoCicero).

Bold And The Beautiful Scoop – Will Liam Spencer Come Clean With His Wife?

Liam was highly relieved that the person who called out: “Hold it right there Liam Spencer, I got you!” was Charlie Webber (Dick Christie) and not Deputy Chief Baker (Dan Martin). However, he was still shaken to his core.

On Monday, Hope will ask him why he’s been acting so strangely. And he’ll want to tell her the truth, with every fiber of his being. But will Liam come clean with Hope?

Today on #BoldandBeautiful, Eric opens up to Ridge about his relationship with Quinn. pic.twitter.com/KOuUa3pNj0