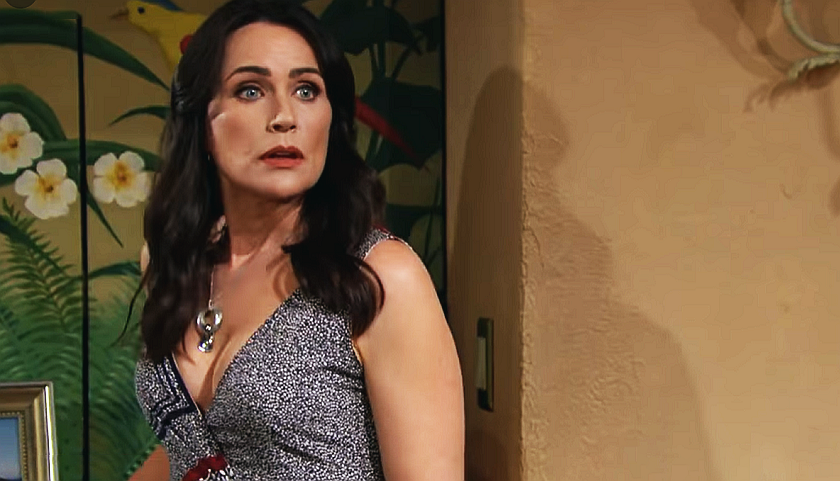 The Bold And The Beautiful (B&B) scoop for Friday, May 7 reveals Quinn Forrester (Rena Sofer) will have some explaining to do.

In addition, Brooke Forrester (Katherine Kelly Lang) will be shocked when Carter Walton (Lawrence Saint Victor) stands up for Quinn.

Spoilers tease Brooke will go down the list of Quinn’s past transgressions while she’s talking to Carter. She outed Brooke’s kiss with Bill Spencer (Don Diamont) at the Bridge reunion party. Then she undermined Brooke’s relationship with her husband even further.

Quinn schemed with Shauna Fulton (Denise Richards) to break up Bridge’s marriage. At Quinn’s behest, Shauna used Ridge Forrester’s (Thorsten Kaye) cell phone to text Carter. She sent the lawyer a message telling him to file divorce papers. Then she tricked a drunken Ridge Forrester (Thorsten Kaye) into marrying her.

Of course, Brooke was the one who started it all by telling her nemesis she wouldn’t be satisfied until Eric Forrester (John McCook) saw her for the conniving witch that she is. She also told Quinn her portrait was coming down and would be replaced with Stephanie Forrester’s (Susan Flannery).

Carter is well aware of Quinn’s errors in judgement. He had Shauna’s marriage to Ridge declared null and void. So this will cause Brooke to be even more surprised when Carter jumps to Quinn’s defense. He’ll tell Brooke Quinn’s not all that bad, in fact he thinks she’s nice. But will Brooke be wary of his motives?

Meanwhile, Quinn will be on the hot seat with her husband. Eric overheard her telling her best friend that she wouldn’t let one night ruin her marriage. On Thursday, he asked Quinn what she meant. The schemer will stutter and stammer as she tries to explain herself.

But rumor has it, Shauna will immediately jump to her bestie’s defense. Not only will she cover for Quinn, once again she’ll promote her to Eric. But will he fall for it?

Today on #BoldandBeautiful, Quinn and Shauna find themselves in a tight spot with Eric. pic.twitter.com/bhMv0OEm5H