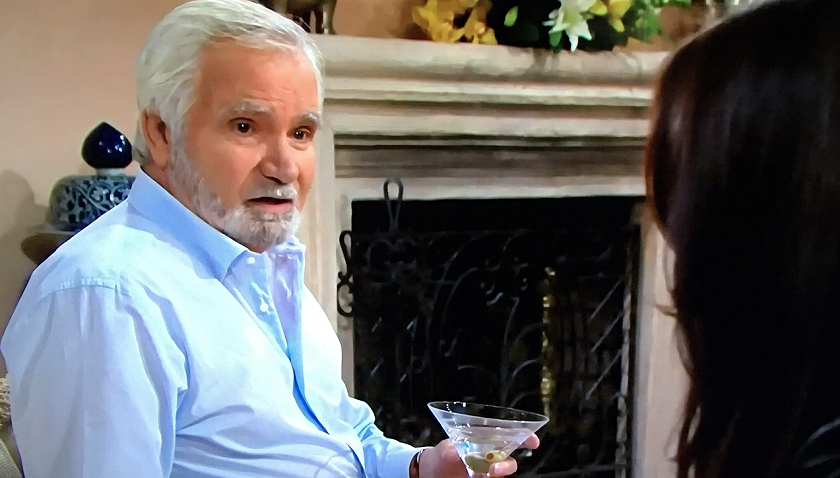 The Bold And The Beautiful (B&B) scoop for Friday, March 20 reveals that Eric Forrester (John McCook) will innocently give his wife the perfect venue for her revenge plot.

Also coming up on Friday, Sally Spectra (Courtney Hope) and Dr. Escobar (Monica Ruiz) will have a major blow-out. And Sally’s devastating diagnosis will be revealed.

Spoilers tease Eric will tell Quinn he’d like to do something special for Brooke Forrester (Katherine Kelly Lang) and Ridge Forrester (Thorsten Kaye). Bridge is back together and Eric will suggest to Quinn that they hold a party to celebrate the reunion.

No doubt, Quinn will be exited by the idea. It will give her a chance to finally get the ultimate payback on Brooke. Quinn has never been a big fan of Brooke’s, but in the past few months, she’s grown to despise her. Now that she’s seen proof of Brooke kissing Bill Spencer (Don Diamont), she’ll figure the party would be a great chance to showcase Brooke’s betrayal.

Bold And The Beautiful And Young And The Restless Scoop: What The Stars Are Up To Amidst The COVID-19 Shutdowns #BoldandtheBeautiful #BoldandBeautiful #YR #YoungandRestless #YoungandtheRestlesshttps://t.co/wLgrAJAaz7

She’ll tell Eric that hosting a reunion party for Ridge and Brooke is a great idea. He’ll be a little surprised by Quinn’s enthusiasm, as he will have been expecting her to protest. Then again, poor Eric will have no idea he’s just provided his wife with the perfect opportunity to exact revenge upon her enemy.

Bold And The Beautiful Scoop – Could Sally Spectra’s Illness Have Been Misdiagnosed?

There have been many rumors and a a lot of fan speculation about Sally’s illness. Some viewers think that whatever Sally has, it isn’t life-threatening at all. They also believe she paid off the doctor to say it was fatal. This could also be why she insisted Katie Logan (Heather Tom) stay with her when she was getting her diagnosis. Did Sally want Katie to hear, knowing she would blab the secret to Wyatt Spencer (Darin Brooks)?

Another possibility is that Dr. Escobar will tell Sally she was misdiagnosed. Her test results could have been inadvertently switched with another patient. Is that why her doctor suddenly showed up on her doorstep, paying her an unexpected house call? Or is it all just conjecture and Sally really is dying?