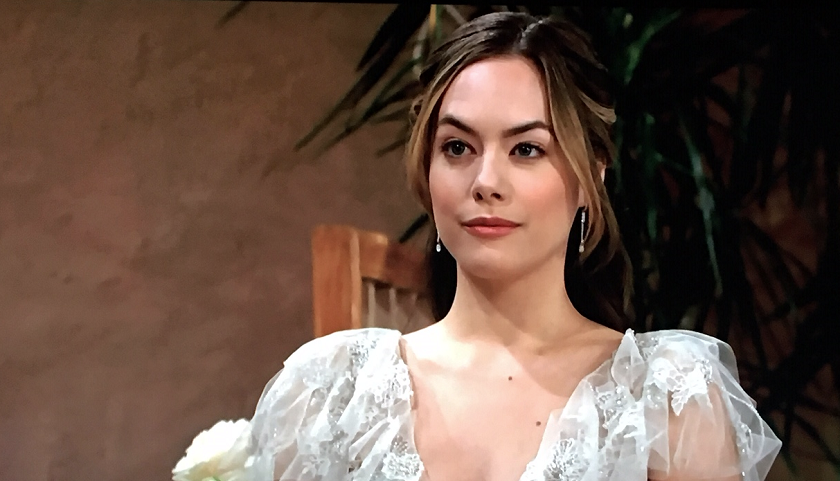 The Bold And The Beautiful (B&B) scoop for Friday, March 13 suggests Hope Logan (Annika Noelle) will stun the wedding guests.

Viewers know Hope went upstairs to console Douglas Forrester (Henry Joseph Samiri) after his epic meltdown during Thomas Forrester’s (Matthew Atkinson) wedding to Zoe Buckingham (Kiara Barnes). “No mommy, stop that,” he said to Hope. “Douglas, it’s going to be all right,” she reponded. “No it’s not!” he exclaimed.

Bold And The Beautiful Scoop – Will Thomas Forrester Declare His Love For Hope Logan?

At the end of Thursday’s episode, Hope had just come back downstairs, wearing the wedding dress Thomas designed for her, with Douglas at her side. She’ll walk right up to Thomas and Zoe and she may even ask him to marry her instead. Of course, this is what Thomas wanted, to make Hope his wife. But he certainly wasn’t expecting it to happen this way.

Rumor has it, this will leave Thomas in quite the quandary. Two beautiful brides will be standing before him, but he can only marry one. Will he declare his love for Hope and shock everyone in attendance? This is likely what Hope will be counting on.

Hope, Liam Spencer (Scott Clifton) and Steffy Forrester (Jacqueline MacInnes Wood) are all in on the plan to serve Thomas a huge slice of humble pie, but will he fall for it? And if he does, how will Zoe react? Will she be standing beside Thomas feeling heartbroken and humiliated, or was she in on the plan to take Thomas down?

Over at Spencer Publications, Bill will continue to rant to Wyatt about the Forresters. He’s already told Wyatt what he thinks of Thomas, and on Friday, he’ll express his feelings about Brooke Forrester’s (Katherine Kelly Lang) relationship with Ridge.

When they discussed Thomas and Zoe’s wedding being a scam, Bill was already expressing his thoughts on Ridge. “It’s nothing more than a smokescreen,” Bill said. “But that deaf, dumb and blind Daddy Dressmaker can’t see it.” Wyatt won’t be surprised to hear his father’s thoughts on Ridge, but he will wonder why he’s bringing up the topic of Ridge and Brooke’s marriage.