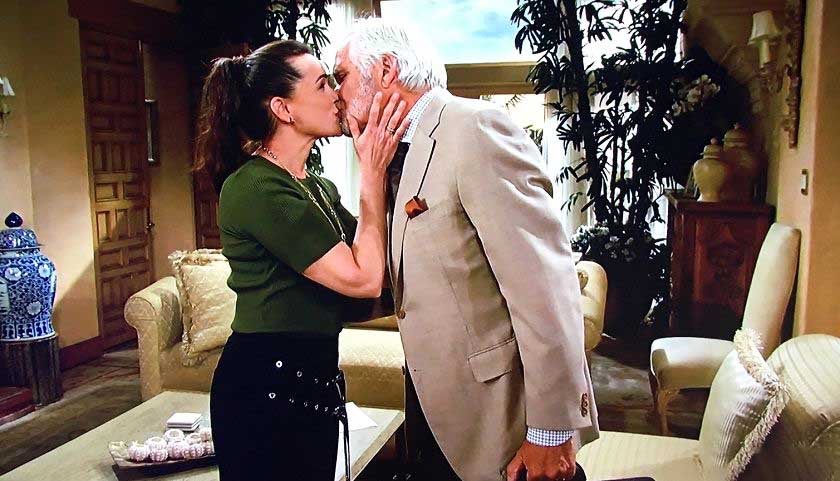 The Bold And The Beautiful (B&B) scoop for Friday, June 25 reveals Quinn Forrester (Rena Sofer) will ask her husband for a recommitment ceremony.

Spoilers tease Thomas will be alarmed when Justin tells him exactly what he’s planning. He’s going to pretend to build a defense for Bill Spencer (Don Diamont) and Liam Spencer (Scott Clifton). However, since they both confessed, he’s sure they’ll do hard time in prison.

Liam and Bill’s time spent in the LA County Jail will be like a picnic in comparison to what awaits them. And what awaits Justin is the power he’s been seeking for years. For instance, when Bill was shot, back in 2018, Justin quickly took over at Spencer Publications. He even became a prime suspect in Bill’s shooting because of it.

Now, another golden opportunity has fallen into his lap and he’s not going to waste it. “The way things look now,” Justin told Thomas on Thursday. “Both Bill and Liam are going to be locked up for a very, very long time.” But will he also tell him there’s no way to clear them now anyway?

Justin deleted the video Vinny Walker (Joe LoCicero) sent the Forrester designer, which detailed his suicide by sportscar. But what will Thomas’ fate be? Will Justin leave just leave him to rot in the cage he’s hidden him in?

Speaking of hiding something, Quinn will become increasingly wary that Paris Buckingham (Diamond White) is going to reveal her slanderous secret. She begged Paris, on her hands and knees no less, not to tell anyone she slept with Carter Walton (Lawrence Saint Victor). But Paris didn’t give her a firm answer.

Quinn’s solution will be to ask Eric Forrester (John McCook) to renew their wedding vows. When Paris sees how committed they are to each other, maybe she’ll keep her mouth shut. But it’s not exactly the brightest idea. Because of course, this could lead to Quinn and Carter’s secret being revealed in the worst way possible. But by whom?