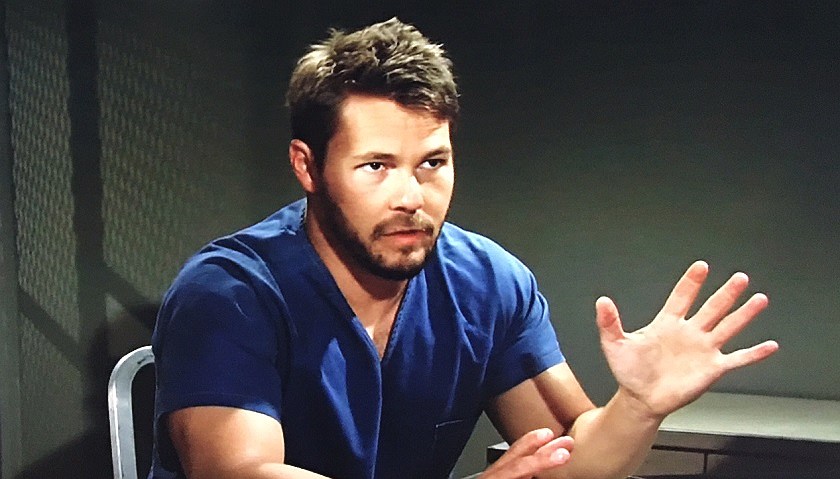 The Bold And The Beautiful (B&B) scoop for Friday, July 9 reveals Liam Spencer (Scott Clifton) will be upset when he finds out he’s being transferred.

In addition, Hope Spencer (Annika Noelle) will be stunned when she finds out how Vinny Walker (Joe LoCicero) set up her husband. Plus, Wyatt Spencer (Darin Brooks) and Flo Fulton (Katrina Bowden) will meet baby Hayes.

B&B spoilers tease Flyatt will bring gifts for Steffy Forrester (Jacqueline MacInnes Wood) and Dr. Finnegan’s (Tanner Novlan) new baby. Sinn will be grateful, although it seems amazing that Steffy would even let Flo into her house. Viewers haven’t forgotten how she tricked Steffy into adopting Phoebe, which led to nothing but heartbreak for the Forrester CEO.

Bold And The Beautiful Scoop – Thomas Forrester Lays It All Out

Meanwhile, Thomas Forrester (Matthew Atkinson) will tell Hope exactly how he ended up in a cage. He’s already told her that Vinny took his own life to set up Liam. “Liam is in jail, because of Vinny.” But when he shared the video evidence with Justin Barber (Aaron D. Spears), the lawyer knocked him out.

Although Hope will still be in shock about how Vinny really met his end, she’ll also be buoyed by the information. It means Liam will be exonerated of all charges in Vinny’s death and can come home to her and the kids.

But it won’t be that simple. At about the same time Hope is trying to help Thomas escape, Liam will meet with Deputy Chief Baker (Dan Martin). And he’ll be shattered when Lieutenant Hot Dog informs him that he’s going to be transferred to a permanent prison.

It’s a move that will come as a complete surprise and Liam will be devastated. But he need not fret, because help is on the way. That is, if Hope can free Thomas before Justin returns.