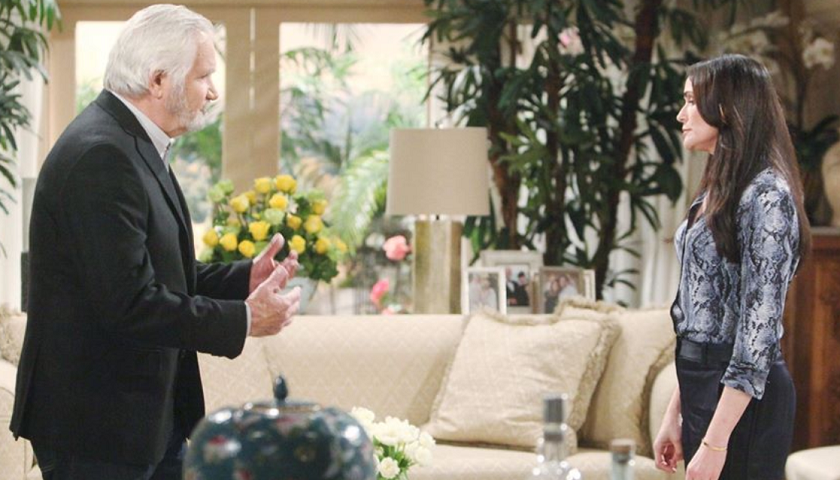 At Brooke Forrester’s (Katherine Kelly Lang) behest, he’s going to kick Shauna out of his guest house. This will not go over well with his wife Quinn Forrester (Rena Sofer).

Viewers should note, this episode of the B&B may be preempted due to the ongoing impeachment hearings in the United States senate. But as with today’s episode, it may be available online at CBS.com and CBS all access later in the day. Let’s hope CBS has finally gotten the message from fans – we want to see our soaps every day, even if it means watching them online!

After Brooke heard about her husband Ridge Forrester’s (Thorsten Kaye) stolen kisses with Shauna, she headed to Eric’s place in a hurry. Once there, she told Eric he needed to kick both Shauna and Quinn out of his house.

Understandably, Eric refused to end his marriage to Quinn just because Brooke told him to. But it seems he’ll feel like he can compromise on this issue by kicking Shauna out of the guest house. Quinn won’t see it that way though. She’ll believe her husband is letting Brooke have her way and she’ll be furious with Eric.

But of course, she won’t take out much of her anger on her husband, she’ll focus most of it on Brooke.

Meanwhile, Steffy will plan to tell Liam Spencer (Scott Clifton) all about why she kissed him. She’s been feeling incredibly guilty that she let Thomas manipulate her into kissing Liam, just as Hope was coming up the walkway at her beach house.

Viewers can expect Thomas to try to convince her to keep her silence. He’ll tell his sister that now that Lope is finally over, she will finally have her chance to reunite with Liam for good. He’ll also remind her that she now has the chance for Kelly to have her father in her life full-time. But what will Steffy do?