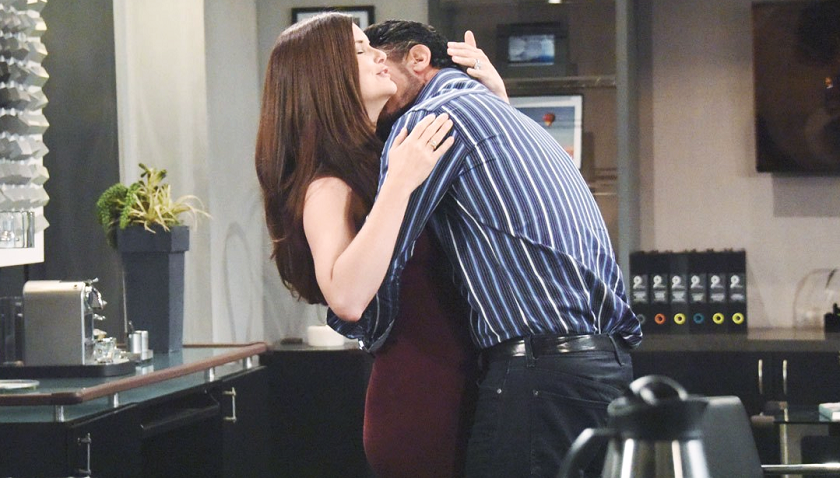 Spoilers tease Wyatt will call on Sally Spectra (Courtney Hope) at Forrester Creations and Sally will not take kindly to his unplanned appearance.

And Katie will be surprised by Bill’s caring and thoughtful attention. Viewers can expect him to literally sweep her off her feet. This is not the Dollar Bill Katie has come to know and love and she’ll actually be wondering what his demonstrative behavior is all about.

Bill has in fact been feeling pretty grateful lately. He thought he was going to lose Katie when she recently went through kidney failure. But thanks to Flo Fulton’s (Katrina Bowden) donation, Katie has a brand new kidney and a new outlook on life. And it seems, so does her husband.

But how far will Bill go in his demonstrations of love for his fiance and the mother of his child? They’re already engaged, so will he ask her to set a wedding date?

Meanwhile, Wyatt has been worried about Sally for days now. He tried to dump her for Flo and was upset that she wouldn’t let him break off their engagement. Really? What did he expect – that she’d be happy for him and wish him well?

To ease his guilty conscience, Wyatt will head to Forrester and tell her he’s visiting her as a friend to see how she’s doing. But rumor has it, she will let him have it. Sally’s already said she doesn’t want his pity, so what more can she do to demonstrate that she wants nothing to do with him?

Apparently, she will do more, by telling him to hit the road. He’s broken up with her twice now for baby thief Flo, so Sally will figure she has nothing left to lose. She’ll tell him he has some nerve showing up at her workplace, trying to throw her off her game. Sally will shut him down completely and tell him she doesn’t want his sympathy, or his friendship.