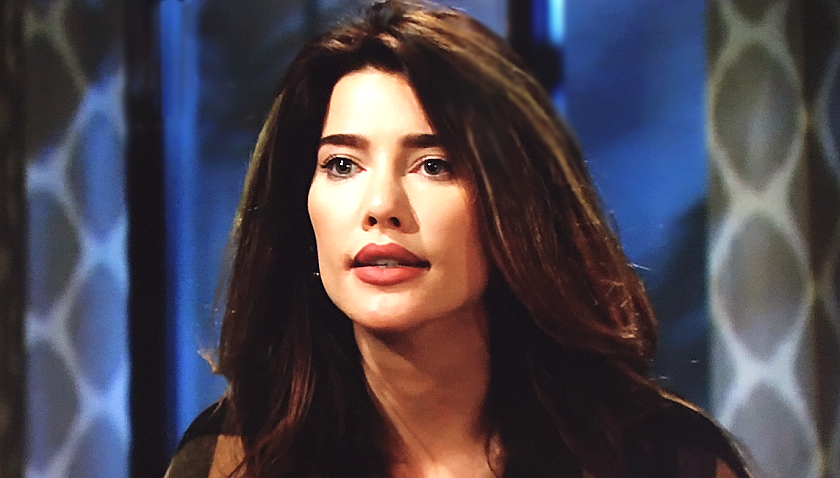 The Bold And The Beautiful (B&B) scoop for Friday, December 18 reveals Steffy Forrester (Jacqueline MacInnes Wood) will have a difficult time hiding her guilt.

In addition, Brooke Forrester (Katherine Kelly Lang) will be there for her husband as he worries about his children.

Spoilers tease Brooke and Ridge Forrester (Thorsten Kaye) will have an emotional conversation. Ridge just went through the scare of a lifetime. Thomas Forrester (Matthew Atkinson) had brain surgery and his father wasn’t sure if he would live through it.

As if that wasn’t enough, his son confessed to him that he was still in love with Hope Spencer (Annika Noelle). He did say he realizes she loves Liam Spencer (Scott Clifton) and will never be his but Ridge will worry about him nonetheless. Brooke will be at her husband’s side as he talks about his son and what he’s going through.

Ridge can also sense something is going on with his daughter. And unfortunately for Steffy, so does Dr. Finnegan (Tanner Novlan). Steffy’s been feeling guilt-ridden about sleeping with Liam since it happened.

On Wednesday, she was relieved when she finally got him to agree to keep it a secret from both Finn and Hope. “We need to get past this and move on with our lives,” Steffy told Liam. “This will impact everyone we care about. I don’t wanna lie to Finn but too much is at stake.”

Bold And The Beautiful Scoop – Dr. Finnegan Tries To Get To The Heart Of It

However, convincing Liam is one thing but living with the secret herself is a whole other ball game. Now Steffy will have to deal with the consequences of her actions and her boyfriend will notice something is off with her. She’s grateful to Finn for saving her brother’s life but every time she looks at the Steam portrait on her wall she feels remorseful for cheating on him.

Finn will try to get to the heart of the matter by asking Steffy what’s wrong however she’s not going to tell him much. How will Steffy deal with trying to hide a major secret from her boyfriend?

Today on #BoldandBeautiful, Paris accidentally breaks a moment of chivalry between Zende and Zoe. pic.twitter.com/KvzPlCaQjL