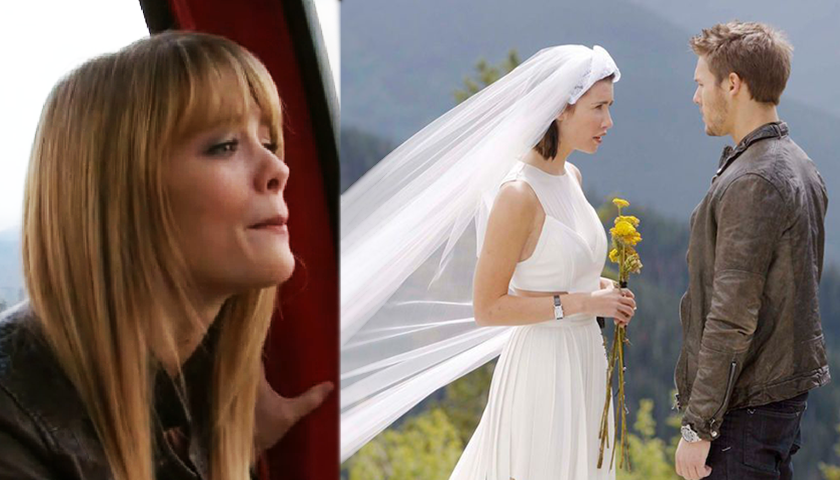 Bold And The Beautiful’s (B&B) Steffy Forrester (Jacqueline MacInnes Wood) and Liam Spencer (Scott Clifton) have been married three times, but none was more controversial than their first wedding.

B&B spoilers for next week indicate Steffy and Liam will team up to keep Hope away from Deacon Sharpe (Sean Kanan). And then another confrontation will take place between the two former rivals, when Hope throws an accusation at Steffy. Plus, there are hints that a couple’s shakeup could take place soon and Steam may be revisited. So, we thought we’d take a walk down memory lane and reexamine the moment that started the dreaded triangle of doom.

Steam said their I Do’s on a hilltop in Aspen on October 11, 2011 while Hope Logan (Kim Matula) was trapped in a gondola, overlooking the entire scene. She screamed Liam’s name as she watched it all go down. Liam was on that hilltop in the first place waiting for Hope. He’d gotten a message from Rick Forrester’s (Jacob Young) friend Othello (Othello R. Clark) that Hope was in Aspen and wanted to see him. So he arrived and patiently waited for her. But something happened that he wasn’t expecting.

B&B Blast From The Past – Steffy Dressed As A Bride

Steffy came walking towards him, wearing a wedding dress and a veil and carrying a bouquet of dandelions. Liam was stunned, to say the least. He had only just proposed to Steffy days earlier, on the rebound. Hope had caught Steam kissing and she had  taken off her engagement ring and left it on his coffee table.

Bold And The Beautiful Poll: Are You On Team Steffy Or Team Hope? Vote in our poll! #BoldandtheBeautiful #BoldandBeautiful https://t.co/54L63ggMiA

“Steffy, we can’t just get married,” Liam told her as she approached. “I wasn’t expecting this. I’m surprised. I mean, I came up here to, uh.” But what Liam didn’t know is that Steffy had suspected he was on the hilltop waiting for Hope, and she had made arrangements of her own.

“I want to marry you, Liam.  When you proposed to me, you proposed to a woman who would do absolutely anything for you,” Steffy said. “I am doing this for you, because I love you, and I want what’s best for you. You asked me to be your wife. And I said yes. So be my husband. Marry me.”

Meanwhile, trapped in the gondola as a result of Steffy and Bill Spencer’s (Don Diamont) manipulations, Hope was going through hell as she saw a minister arrive to marry the pair. She banged on the glass of the cable car and shouted: “Liam! Liam – Just look over here! Don’t do this. Don’t – please, baby, don’t do this!” But it was all for nothing.

When the minister asked what kind of wedding they wanted, Steffy quipped: “A quick one.” She knew the gondola, and Hope, could start moving towards them at any moment. Liam and Steffy said their I Do’s and the officiant pronounced them man and wife.

Steam’s first wedding was the start of a fierce rivalry between the two women and a love triangle that lasted more than 10 years. Keep reading The Soap Scoop for more Bold And The Beautiful spoilers and news. And make sure you join our free Facebook Group.