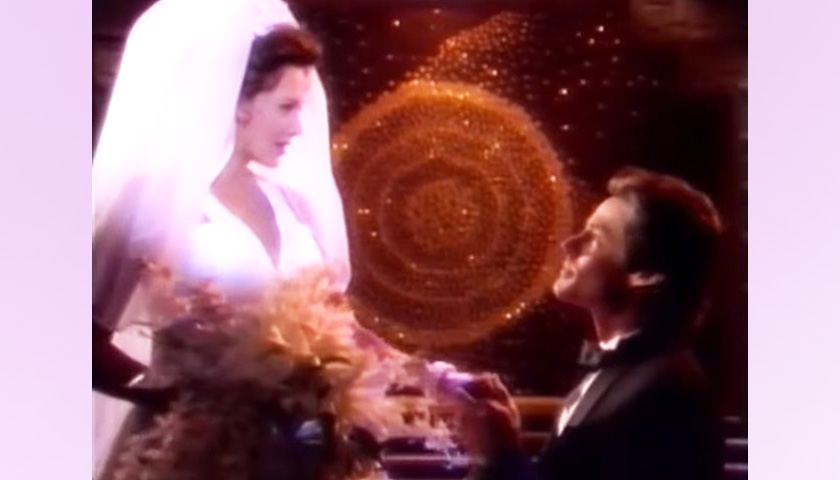 The Bold And The Beautiful’s (B&B) Ridge Forrester (Ron Moss) was well known for his over-the top, romantic proposals. But one of his most memorable was when he popped the question to Taylor Hayes (Hunter Tylo), during a Forrester Creations fashion show.

With Taylor’s (recast Krista Allen) return coming up on B&B this week, we thought we’d take a walk down memory lane and revisit Taylor and Ridge’s (now portrayed by Thorsten Kaye) romance.

Way back in the 1990s, Ridge, Taylor and Brooke Logan (Katherine Kelly Lang) were involved in a complicated love triangle. It was the precursor to the Hope Logan (Annika Noelle), Liam Spencer (Scott Clifton) and Steffy Forrester (Jacqueline MacInnes Wood) triangle viewers have seen over the past decade.

Much like Liam flip flops between Hope and Steffy, Ridge did the same to Taylor and Brooke. And on October 8, 1996, Ridge chose Taylor over Brooke. Forrester Creations was holding one of its semi-annual fashion shows (B&B used to feature at least two shows a year) and Ridge had big plans.

Bold And The Beautiful Poll: Are Brooke And Ridge Headed For A Breakup? Vote in our poll! #BoldandBeautiful #BoldandtheBeautiful #Bridge https://t.co/0lqkLRHUzp

Leading up to the show, Brooke was certain Ridge was going to propose to her. And viewers thought he would too. However, Ridge had witnessed Brooke kissing Grant Chambers (Charles Grant) the night before and just couldn’t get it out of his head.

In spite of her son’s enthusiasm, Ridge’s mother Stephanie Forrester (Susan Flannery), who hated Brooke, was dreading the runway proposal. But when she saw who was wearing the showstopper, she was thrilled. “Oh my God,” Stephanie said as Taylor lifted the veil, revealing her face.

Bold And The Beautiful Scoop – Brooke Cried As Audience Cheered

Ridge was waiting for her at the end of the runway. “Marry me Taylor,” he said, as he got down on one knee. “Please, please say you will.” However, Taylor was hesitant and asked him if it was what he really wanted. He said it was. “Yes, oh yes Ridge, you know I’ll marry you,” Taylor responded. The audience cheered, as a stunned Brooke bawled her eyes out.

Tridge fans have been eagerly awaiting Taylor’s return. And she’s finally coming back on December 10. But will she and Ridge reconnect and rekindle the epic romance they once shared?

Keep reading The Soap Scoop, your source for the latest soap opera spoilers and B&B spoilers and news. And make sure you join our free Facebook Group. But if you miss an episode, don’t fret. You can watch The Bold And The Beautiful online at CBS.com.